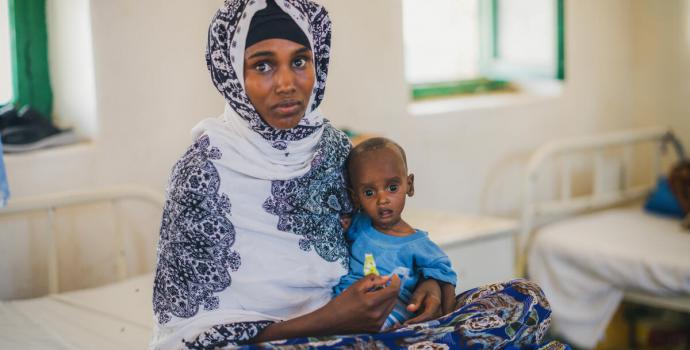 Hawa* and her son Ahmed*, who is showing symptoms of severe acute malnutrition. Photo by Misan Harriman/Save the Children

HARGESIA, October 14, 2022 – Ahead of World Food Day, Save the Children releases a series of powerful images of its new ambassador, British photographer and activist Misan Harriman, to illustrate the devastating impact of the hunger crisis in East Africa on children.

Misan’s images tell the stories of children’s struggle for survival as their bodies fail them and their parents wonder if they will live or die.

The photographs document the hardships facing families in Somaliland as the region experiences its worst drought in 40 years. Children here suffer the most severe consequences of the hunger crisis in the region, with more than half of all children under five (1.8 million) facing acute malnutrition.

More than half a million children across Somalia are thought to suffer from the deadliest form of malnutrition – severe acute malnutrition – which causes blurred vision, loose skin, swollen feet and weak muscles, ultimately preventing children from moving.

For Harriman, who is well known for documenting the Black Lives Matter protests, this is the first time he has turned his lens to a crisis like this.

Speaking of his time in Somaliland, he says: “I needed to find a way to use my lens and my voice to let the world know that this tragedy can be prevented and reversed with urgent action.

“I spoke to parents who are facing an impossible struggle to find food for their children, whose bodies are failing them due to hunger. As a father of two little girls, it was truly heartbreaking. .”

Ahmad, 9 months* suffers from many symptoms of severe acute malnutrition, the most dangerous and deadly form of malnutrition. Its body is tiny, weighing roughly that of a newborn.

After visiting a mobile health clinic run by Save the Children, Ahmed* was referred to a stabilization center in the town of Buroa, which treats the most critical cases of malnutrition.

His mother Hawa* says: “The drought has had a devastating effect on us, especially my child, who is malnourished due to a lack of milk and nutritious food. He has been sick since birth. He suffers from stomach pain, vomiting and fever. We eat what we can. Sometimes we don’t eat.” she says.

Hamdi, two years old* lives with his grandmother and five siblings near the town of Burao. He is being treated for severe malnutrition, as the current drought has killed all of his grandmother’s livestock, leaving them with no income and little to eat.

Speaking of his health, Fawzia, Hamdi’s grandmother** says, “He suffered from severe malnutrition. He became very weak and refused to eat and drink. He had a fever and vomited if he ate or drank anything. His skin was so hot and would burn you if you touched him.

“The biggest challenge is not having a stable source of income to cover my children’s food needs,” she says. “I don’t have nutritious food for the children. I barely get food for myself,” She keeps.

Four consecutive failed rains in the Horn of Africa, compounded by rising food prices due to war in Ukraine and the fall of the Covid-19 pandemic, have left an estimated seven million children facing a extreme hunger in the region.

Nearly 6.7 million people in Somalia – 41% of the population – are expected to face widespread food shortages between October and December this year, an increase of nearly 2.4 million people on the figures previous ones.

With the UN warning of famine in parts of the country within months, Save the Children is calling for urgent action before time runs out.

“These powerful photographs illustrate the preventable catastrophe unfolding before our eyes. No child should go to bed hungry; no parent should wonder which of their children to feed

“People in Somalia and Somaliland are used to bad rains and bad harvests, but this situation is truly unprecedented. The lives of millions of innocent children are in danger and time is running out for them. The world must act now to avert catastrophe.

Save the Children has worked in Somalia and Somaliland since 1951 and has programs across the country that support children’s health care, education and food needs. Last year, its work in the region directly reached more than 3 million people, including 1.7 million children.

Misan Harriman is a photographer, entrepreneur and social activist and is one of the most shared photographers in the Black Lives Matter movement. He is also the first black person in British Vogue’s 104-year history to grace the cover of its September issue. In July 2021, he took over as Chairman of the Southbank Centre, London.

Misan has been working with Save the Children UK since December 2020, when he captured portraits of a girls’ sewing collective in Hackney, England. In December 2021, he continued to photograph influential names from the worlds of fashion, film and music with the messages of protest and hope for the future of young people.

In September 2022, Save the Children UK appointed Misan Harriman as the association’s official ambassador.

Here is Le Corbusier as you have never seen him