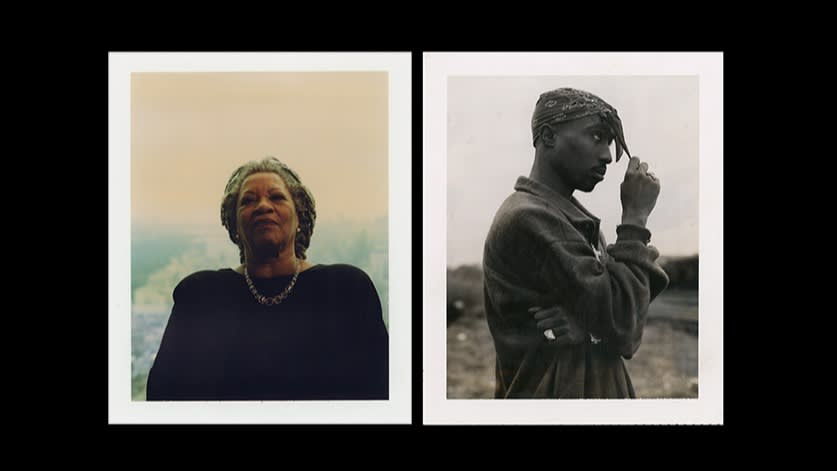 What Dana Lixenberg was thinking when she photographed Tupac, Ivana Trump, Kathleen Turner and more

This is how Dana Lixenberg makes an image: she slips under a dark cloth strapped to her large-format camera, frames and focuses her shot, emerges, loads a 4 x 5 analog film cassette, fixes her eyes on the person in front of her and clicks the shutter button. This is how she has done portraits of more American artists and celebrities than you can imagine, looking at them directly. It’s also how Lixenberg, 57, has done groundbreaking work documenting the beautiful and grotesque American experience for more than 30 years. A critical part of the process is running tests on instant Polaroid film to check lighting and composition. His new book, titled Polaroid 54/59/79 in reference to the types of peelable films produced by the company until its final bankruptcy in 2008, collects hundreds of test shots from countless shoots. The result is personal and raw, like a found treasure. Lixenberg and her assistants appear in many photos, as do the selfies she encouraged her famous models to take, long before the term became ubiquitous. They testify that Lixenberg isn’t that much into fame, but she’s still looking for something she recognizes. Fuji continued production of peelable film after Polaroid’s bankruptcy, but only for a few years. Lixenberg still has 110 boxes in his Amsterdam studio, or 1,100 test shots.

Dana Lixenberg: This was shot as part of one of my first feature films for Vibe. My work for the magazine really led to all my other editorial work in the United States. The well-known image of him, on film, is the one where he looks at the camera. You don’t see him here – it looks like he’s just being introspective – but there were a lot of people there, and it was a very intense shoot. I spotted this industrial area of ​​Atlanta on the outskirts of town. It was drizzling. The challenge was to keep those around you at a distance and to concentrate. He probably didn’t really know what to think of me. But he was a real artist. When you take your job seriously and the person you’re photographing is serious and you care about them, people feel that. It’s less about hanging out or being one of the guys. At heart, I’m primarily a documentary photographer, but I also try to reflect and create a compelling image that can be experienced regardless of the context for which it was designed.

The focus needed for a shot, especially with a large format camera, helps keep the subject engaged. When the model doesn’t have expressive body language, I tend to move the camera around and integrate the environment more. That certainly wasn’t the case with Ivana, who was incredibly dynamic, but setting up the camera with lighting on a moving yacht was definitely a challenge. After filming, we joined her for a swim in the ocean.

I made the portraits of him on the floor of my building. He was very shy and the magazine had sent someone to do his hair for the shoot. But he didn’t like to be stylish. (I totally agree because the less complicated the better.) I photographed him as he was, and he was carrying the pencil in his shirt. For me, it’s not about grand gestures or dynamic action. The action lies in the small details and the gestures that people make without realizing it.

She clearly wasn’t excited about doing the shoot. I think it was a day when she had to do one press event after another. But, in a way, I integrate that into the shooting. When I work, I have to open up completely. It’s really how you enter a space. I need to quickly assess what someone looks like or feels like. Sometimes people are a little defensive at first; maybe they are uncomfortable. It’s okay if someone is anxious. It’s my job to put the person at ease, not the other way around.

It was shooting the cover of the album for my love is your love. It was her first studio album in eight years and she was a little nervous. I had worked with her several times before, so there was confidence, although I probably wasn’t an obvious choice to photograph her. His image, like that of many great artists, had been vetted, but someone on his team was trying to open it up a bit. In the end, on the album cover, she smiles, of course. But these tests show its vulnerability. They are very human.

It was my home in New York on Broadway. I prefer not to work in rental studios, so sometimes if I needed to find a location, I would say, “Let’s do it at my place. He was quite discreet. It was a very hot day in September, no air conditioning. His girlfriend was pregnant at the time, and I made a Polaroid for them where he pushed his sympathy belly towards her pregnant belly. That’s the good thing about Polaroid. It’s not like you’re taking anything from someone; you do something and you can give it to them.

With color Polaroids, you had to wait two minutes to shoot the image, and sometimes I got impatient and shot too soon. You can see that the image is underdeveloped; the color is quite monotonous. I photographed this story in Las Vegas for a report on copycats. Audiences know they’re not the real deal, but still pose with them on encounters. It was all pretty surreal, but the reality often is. I like to create paintings from situations that I encounter.

During my first summer in New York, in 1989, I worked in a restaurant in the Hamptons. I earned enough to support myself in town during my debut. There were always celebrities coming for dinner and I usually didn’t work in the VIP section due to my lack of experience. But one evening, I waited on a table with Kathleen Turner and some friends, who were quite loud and very funny. They got buzzed, and she left this huge tip. Several years later I was commissioned to photograph her for the Sunday Telegraph magazine. I told her the story of the really big tip she left me. I always tell people, it’s all up to you.

I dedicated the book to the memory of Jacqueline. She needed a portrait for something, and I photographed her at home. I met her in New York around 2003. When we first met we couldn’t stop talking and this endless conversation lasted until her untimely death in 2018. As an artist visually, her professional life was very different from mine because she didn’t really do a lot of commissioned work. But we both traveled a lot and had similar lifestyles, in addition to being both Dutch. We will always share our experiences and learn from each other. She was a great artist; the way she approached her work made me see aspects of the world in a new and different light.

It was a reshoot for a magazine that was unhappy with a shoot someone else had done. She appeared on the Today show, and I went to meet him in the green room. The backstage of American television studios is not very glamorous, and it was very early in the morning. But I like when people don’t try too hard. She was very real.

Through my editorial work in the United States, I really got to know the country. Even if I photograph people who have completely opposite opinions to mine, I enter a work without judgement. I always want to be respectful. She seemed like someone I’d like to have a drink with. There would definitely be topics of conversation where you wouldn’t want to go. He was a fiery character, intriguing, a little neurotic, very nervous.

I always get nervous before a shoot, but that goes away once I start. Sontag was very nice and the filming was easy. I photographed her on her terrace, which is near her partner Annie Leibovitz’s penthouse. The hardest part of every shoot is deciding where to start. I step into a situation and have to make quick and quick choices. But even though I have no idea what I’m doing, where I’m going with a shoot, I just have to pretend I know and keep going. I must. It’s my job.

Jeffersonville, Indiana is a small town across the river from Louisville, Kentucky. I did a seven-year homelessness project there, started by a Jane magazine mission in 1997. It was a small shelter that catered to families. To give back, Trish was volunteering, sorting through donated clothes, and she selected a few things for the shoot. She said: “I surprise people every day when they find out that I am homeless. The image you have of homelessness is that of people on the street, but there is a large group that does not fit into this category. Workers in the United States very easily become homeless. I am not interested in illustrating a person’s temporary situation. I do not photograph people sitting on the shelter bed. It just reduces the person.

Dana Lixenberg’s exhibition “Polaroid 54/59/79” is at Huis Marseille, Amsterdam, until September 4. huismarseille.nl
The accompanying book is published by Roma Publications

You can now study for a first class degree in… Harry Styles. And why not? | Alex Clark