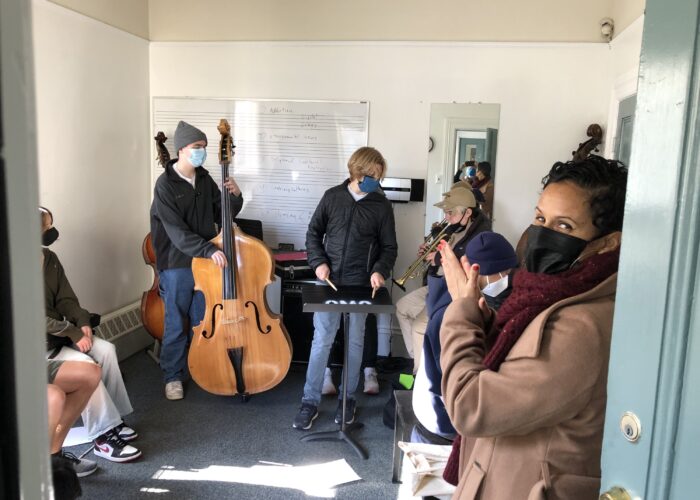 What could be more inviting than having a video infusion of new music delivered to your inbox every morning? Well what about of them?

As part of its centennial celebrations, the San Francisco Community Music Center is set to launch “(Re)Imagine,” a weeks-long collaboration with Oakland composer, performer, and music teacher Cava Menzies. To match the school’s 100 years as an accessible, low-cost center for music education, Menzies plans to send out 100 short music videos — two or three minutes each — featuring his original collaborations with students and the teachers of the school, as well as with fellow musicians. of the whole world.

The plan is for them to roll out, two at a time, for 50 days, starting Monday, April 4. (You can sign up to receive the videos on the school’s website website.)

The videos, Menzies told The Chronicle in a recent video interview, are “very raw and real” — an attempt to capture the lives of her and her musical partners as they are now. Some were created remotely on Zoom, using the software that has become ubiquitous during the pandemic shutdown; others feature Menzies and a student in the same room, working on musical material together.

“One of the students asked me, ‘Do I need to dress up, for example, in concert attire?’ And I said, ‘No, absolutely not! Come as you are, as you normally dress. We’re really trying to get a realistic snapshot of who you are,” she said. “I think that also feeds the musical part.”

The 100 videos are divided into two parts. Half of them were created in partnership with CMC students, often relying on music they created themselves. The other half features Menzies with a range of professional artists, including San Francisco drummer and educator Jaz Sawyer and representatives from South African music group Roots 2000.

The pieces encompass a wide range of instrumental and stylistic choices – from brass and woodwind ensembles and small string bands to large jazz bands and Latin rhythm sections. Some involve intimate duets and solos.

Like so many other cultural artifacts of the 2020s, “(Re)Imagine” originally took shape during the early months of the COVID-19 lockdown, when Menzies was looking for a way to keep his creative juices flowing and stay in. contact with his students at the Oakland School for the Arts.

“I was really laying on the floor most of the time,” she recalls, “and texting students, checking in, and they were in one place. There was a real connection there, because we were having the same experiences. It didn’t matter that I was their teacher and they were my students. We were all navigating this great unknown.

Menzies began creating and posting short videos, alone and with colleagues from the jazz and classical music world. The more the videos spread, the more people wanted to get involved.

“I was getting text messages from friends saying, ‘Hey, that’s really cool, I’d love to jump on one of those. And if I didn’t post for a day, people would ask me, ‘What’s going on?’ ” she said. “It almost became my job.”

These videos also caught the attention of CMC teachers and administrators, who were anticipating the centennial celebrations.

“We were all sheltering in place and drawing inspiration from this incredible internet project,” said Julie Rulyak Steinberg, the school’s executive director. “Cava and his work really spoke to us. She worked with jazz, R&B, soul – all these different genres.

“We were looking for collaborative opportunities for students to express themselves during the pandemic and we thought, ‘Wouldn’t it be cool if they could work with Cava?’ ”

The student videos, Menzies said, were organized under three general headings: community issues, cultural identity and international music. Working with Menzies and Katrina Wreede from the school’s composition faculty, any of the students were invited to translate their thoughts on these topics into music for the first time.

“If they want to tackle a particular issue like global warming,” Menzies said, “some of the exercises we did in the early meetings were just, ‘How do you describe that musically? So come up with adjectives you would use to describe global warming, then take those words and apply them to musical concepts. ”

This process, she said, has unlocked musical access for many students.

“A lot of them are intimidated by the composition, or feel like it has to sound a particular way, and the whole spirit of this project is that there are entry points wherever you are. “, she said. “You don’t have to be this super-skilled, technically proficient musician. You just use your instrument to explore ideas and make sense of sounds.

Maria José Reyes Cruz, a 16-year-old student at Galileo High School in San Francisco who is studying singing at CMC, was inspired by a poem she wrote for English class to create a short song, ” You Are Not Alone”, with Menzies.

“It was a poem about how people sometimes feel lonely – or they don’t even know how they feel – and it seemed to touch people,” she said. “So I wanted to share it.”

She and Menzies worked out a melody for one line of the poem; the video, which is expected to be released on day 10 of the project, shows them both in performance.

“I was a little nervous because it’s a vulnerable poem, and there’s something vulnerable about the performance. But in the end, it was also inspiring. Reyes Cruz noted. “I mean, it’s music – anyone can make music if they really want to.”

This ethos of democratic accessibility has been central to the school’s philosophy since its founding in 1921. From its two buildings – a main campus in the Mission district and another in Richmond – the school offers a wide range instrumental, vocal and composition lessons in many genres for young artists and adults alike.

“(Re)Imagine” comes amid a centennial celebration that has already seen the school inaugurate in February for an expansion of the Mission’s physical factory on Capp Street.

“It’s a decision we made in 2012, long before the pandemic hit,” Steinberg said. “We have been crammed into our small space for a long time, far beyond our capacity. This will therefore allow the development of more free programs adapted to the community.

The school also launched a new tuition-free program and expanded its Black Music Studies programming with a program designed by Maestro Curtis. On April 23, as part of the Yerba Buena Gardens Festival, the school plans to present “A Song of Triumph: The History of Black Music,” a multifaceted work by Curtis that traces black music from its African roots to the present day.

But first comes “(Re)Imagine”, with its regular rhythm of two musical works per day – weekends very well included – for 50 days.

“We frame this as 100 blooming flowers,” Steinberg said. “We send seeds of inspiration through the student body, through the faculty, and through all the artists involved.”