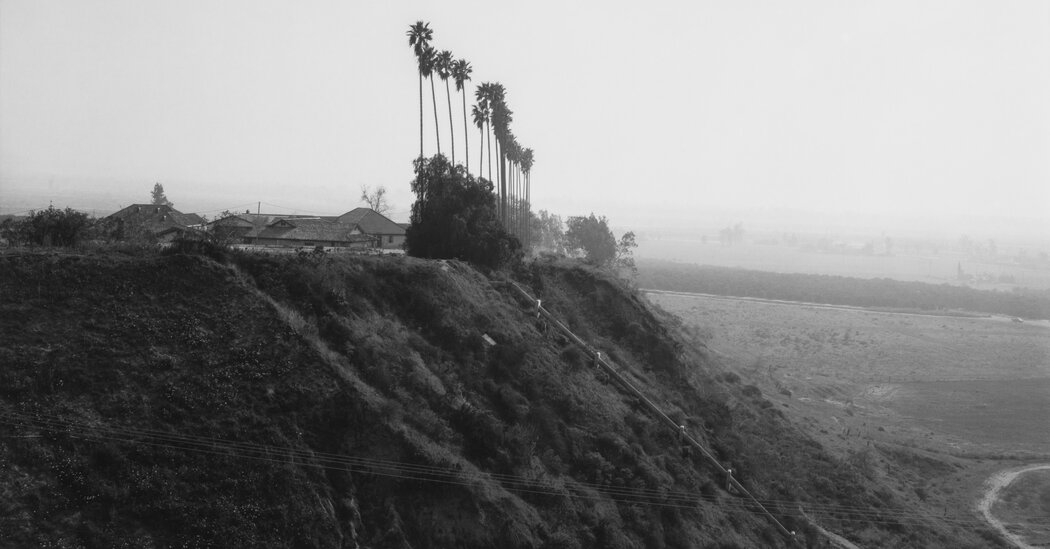 WASHINGTON — Robert Adams photographs the landscapes of the contemporary American West, however degraded, with the loving attention that his artistic ancestors, Timothy H. O’Sullivan and Carleton E. Watkins, gave to the sublime panoramas of the 19th century. . In the words of the Polish poet Adam Zagajewski, he tries to “praise the mutilated world”.

Its powerful ally is the western light. With the prowess of a native tracker, he explores his quarry – a subdivision of houses into plots, a clear-cut forest – to determine the time of day when a site is illuminated with a seemingly blessed glow. And then he shoots.

“When I photograph clearcuts, I know what got me there was the feeling that the world was falling apart,” he told a group of college students in 2001 at Astoria, Oregon, where he lives with his wife. , Kerstin Adams. “But after spending enough time there to recover from my shock at the violence, after working an hour or two and being absorbed in the structure of things as they appear in the viewfinder, I don’t think only on disaster. I find things in the sun. You can stand in the most desperate place, and if it’s daylight, you can experience moments that are right, that are whole.

“American Silence: The Photographs of Robert Adams,” a masterful career survey at the National Gallery of Art in Washington, D.C., reveals that over half a century of making black-and-white images, Adams , 85, is finding it increasingly difficult to maintain this attitude. The weight of time – on his psyche, the landscape or both – can be discerned in the relentlessly dark photographs that have dominated his output over the past few decades. The sky is excluded from many of these images, and when it does enter it is often a gray patch of smog.

Adams came to public attention as one of ten photographers included in a famous exhibit, “New Topographics: Photographs of a Man-Altered Landscape,” mounted at the George Eastman House in Rochester, NY, in 1975. Participants such as Bernd and Hilla Becher or even Lewis Baltz, the artist most closely associated with Adams, took serial photographs that could be forensic evidence in a lawsuit. Adams discerned poetry where others found the dark prosaic. He cited as influences the paintings of Paul Cézanne – with their play of sunlight on geometrically simplified houses that eerily foreshadowed the repetitive box-like houses he saw in Colorado – and Edward Hopper, with their melancholic light at the beginning and end of the day and their haunting evocations of loneliness. Two-thirds of “North Denver Suburb,” 1973, is devoted to clouds that rival any Cézanne saw above Mount Sainte-Victoire; and the houses below, shabby as they are, form a set of architectural blocks that the French modernist master could have rendered directly, without abstraction. “Longmont, Colorado,” 1977, an Adams photo of a woman sitting in a wood-paneled den in a house, could serve as the cover illustration for “Revolutionary Road,” Richard Yates’ classic novel about suburban disillusion Americans.

Adams once said that O’Sullivan is “our Cézanne”, finding interest and tension in quiet, empty landscapes. In the excellent exhibition catalog, Sarah Greenough, senior curator and head of the National Gallery’s Department of Photographs, points out that in addition to her depictions of great American landscapes, O’Sullivan documented the carnage of the Civil War. . , where corpses of soldiers and trees destroyed by artillery were scattered on the ground, just as the remains of majestic fir trees litter the ground after a clear cut.

Adams belongs to a bloodline. O’Sullivan and Watkins, while describing the mountains and valleys of the West, did not ignore the accidental marks of human encroachment. Indeed, as documented in “American Geography,” Sandra S. Phillips’ concise and admirable monograph from last year with Sally Martin Katz (conceived as a catalog for an even larger exhibition at the San Francisco Museum of Modern Art that has been scuttled because of the pandemic), the healing of western lands began in the 19th century with the advent of agriculture, industry, mining and railways. But the major impact would come later. The epic period of western deforestation was memorably described by Darius Kinsey, who in Washington state in the first half of the 20th century photographed loggers standing over fallen trees like tall white hunters. posing with killed elephants.

Early in his career, Adams investigated early prairie settlements in eastern Colorado, where houses and churches made of wood or adobe tread lightly over the terrain. The horizontal clapboards of a house in “Clarkville, Colorado”, 1972, rhyme with the vast prairies and sky that dominate the image, and with the thin, slightly noticeable overhead wires above. Adams chose to include only a narrow section of the building, so that it modestly intrudes into the right margin of the frame.

When he turned to the more densely populated neighborhoods near Boulder, Adams saw that the harmony between nature and civilization had broken down. In “Northeast from Flagstaff Mountain, Boulder County, Colorado”, 1975, an ominous shadow at the bottom of the image outlines a bare mountain, which overlooks featureless housing estates that stretch mournfully towards the horizon. The shadow of a tree cast by night lighting on the door of a garage of a house in “Longmont, Colorado”, 1976, hovers like a ghost, testifying to what has been destroyed. Returning to the scene of the crime in “Boulder County, Colorado,” in 1983, Adams photographed fire-blackened pines on the mountainside as tortured and twisted victims, pacing a valley shrouded in smog. invisibility.

The trees in Adams’ photographs have an anthropomorphic – and in some cases, even universal – presence. The massive trunks of a series of close-up arboreal portraits, “Poplars, Harney County, Oregon”, 1999, contain whole worlds of sustained life, like the giant sequoia which has a starring role in Richard Powers’ novel “The Overstory”. More typical, however, are less bloody specimens. The row of trees at the precarious edge of a cliff in “New Development on a Former Citrus-Growing Estate, Highland, California”, 1983, are sentinels in a lost war; and the two scruffy trees in “On Signal Hill, Overlooking Long Beach, California”, 1983, are like Philemon and Baucis – the elderly couple in Greek mythology who, in exchange for their hospitality, are taken up a mountain to see the flood that washed away their less generous neighbors and eventually, at their will, are turned by the gods into linden and oak, side by side.

Adams’ influence on later photographers, who generally worked in color, is widespread. To cite a few prominent examples: Mitch Epstein’s “Property Rights,” published last year, chronicles in magnificent detail pockets of local resistance to industrial intrusions into the environment; and Alec Soth, even younger and working like Epstein with an 8 x 10 camera, records the fallen landscape with elegiac lyricism. Soth, Wisconsin’s 2002 photograph of an illuminated gas pump stand, set next to a cemetery and under a mountain, could serve as a biting pendant to Adams’ magnificent Twilit Hopper-esque image of a similar installation on the side of a mountain that bears, with unintentional irony, the advertising banner “Frontier”.

The show’s most recent photographs, from 2015, were taken on a beach near the Adams house in Astoria. In one, a giant stump washed up on the shore bears witness to an act of brutality. Lying on wet sand under a streaky sky, all rendered in shades of gray, it is tragically beautiful.

The subtle ambiguity of gray suits Adams’ mind as well as his eye, because life is never as simple as pure black and white. The trees that were planted at even spacing along a highway in “Interstate 10, West Edge of Redlands, California”, 1983, are a study in sterility, a testament to nature suppressed and tamed in the name of progress . But if you look closely, you can see a bird perched on one of the four overhead wires against the pale sky, like a note on a musical key. Even in this broken and diminished world, says Adams, it is possible – no, it is imperative – to exult and sing.