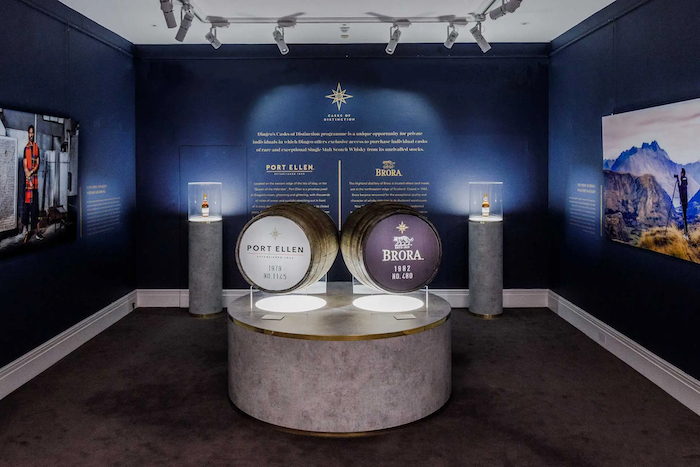 The whiskey is sourced directly from dwindling original ‘ghost’ stocks at the iconic Brora and Port Ellen distilleries.

Each cask offers the opportunity to collaborate on an order with an internationally renowned artist, creating unique pieces that reflect the distilleries and their whisky.

The auction, which runs until June 14, would be part of the Platinum Jubilee season celebrations of British craftsmanship and heritage with Sotheby’s. The casks have been handpicked as part of Diageo’s VIP program, the Casks of Distinction.

Jonny Fowle, Head of Whiskey at Sotheby’s, said: “This partnership between Sotheby’s and Diageo brings an unparalleled supply of rare whiskey casks to auction. Trying the 1982 Brora, I was amazed at its quality – the rich flavors of cooked fruit elevating its lightly peaty character. The Port Ellen is a masterclass in 1970s Islay smoke with significant cask influence, which, especially when sourced from a closed distillery, is precisely the style sought after by the world’s top whiskey collectors. .

Located at the western tip of the Isle of Islay, Port Ellen is considered a jewel in Diageo’s crown with thousands of miles of ocean and sunshine stretching out before it.

A company statement said Port Ellen whiskey is gaining more and more status over its years of closure, and this cask is one of the most valuable to exist among Port Ellen’s dwindling stocks of ghost casks. With its doors closed in 1983, the current plan is for the distillery to start making whiskey again in 2023.

The Port Ellen 1979 will be auctioned together with a unique artifact, made after the sale, in collaboration with designer and artist Ini Archibong.

Archibong will create a unique work of art capturing the light of Port Ellen and its spirit in colored glass. The unique sculpture will be a so-called physical expression of the “Dram and the Water” – representing both the precious nature of the liquid inside the cask and the distillery’s most valuable resource.

Crafted from Murano glass and finished in Islay colours, the sculptural piece will be presented to the cask owner in Port Ellen once the distillery reopens. Archibong will also develop and create a bespoke color gradient that will be used to design a set of labels for the bottles pulled from the cask.

Archibong said this artwork will represent the precious nature of the liquid inside the cask.

“Unified and juxtaposed with our most precious resource, water, they represent the heart and soul of Islay and its people. Like a precious magical gem precariously holding a finite resource that offers endless memories; this piece reminds its owner of the moment they captured Islay in a barrel and its spirit reflected on the surface of the colored glass. This artifact is a unique piece. There is only one,” he said.

Nestled in the Highlands on the northeast coast of Scotland, Brora is said to have become renowned for the quality and character of whiskey aging in its closed warehouses. Now 202 years old, the Brora Distillery was reawakened in May 2021 after a three-year restoration.

Although the distillery has reopened, there remains a finite amount of whiskey from before it closed, this being Brora’s oldest existing cask for sale.

The Brora 1982 cask will be offered alongside a print by New Zealand photographer Trey Ratcliff. Known for what is described as his mesmerizing photography capturing the beauty of distant landscapes, the master photographer will travel to Scotland for the very first time, accompanied by the cask’s new owner.

Together they will capture images that bring to life the landscape that helped shape this whisky. The photograph selected by the keg owner will become a large format edition print, in addition to being used to create a set of bespoke labels for bottles to be pulled from the keg.

Ratcliff said his photographs capture moments in time and give viewers the opportunity to reflect and transport themselves to another place in the world.

“I have dedicated my life to capturing the beauty that exists at the end of the world, where the sky meets the sea, Brora is one of those places. I wanted to travel to Scotland and take in its beautiful scenery and to do it for the first time, accompanied by someone who appreciates exceptional whiskey like this, will be an epic adventure,” he said. .

The winner of the auction of these rare casks will have the opportunity to work with Diageo experts to age their Scotch for up to five years.

The barrels are auctioned in partnership with Sotheby’s as part of their ‘Jubilee Season’ on June 14 in London. Diageo will donate 5% of the hammer price of the two barrels to Care International to support their work in Ukraine.

For more information on the sale, you can consult www.sothebys.com/PortEllenBroraCasks.