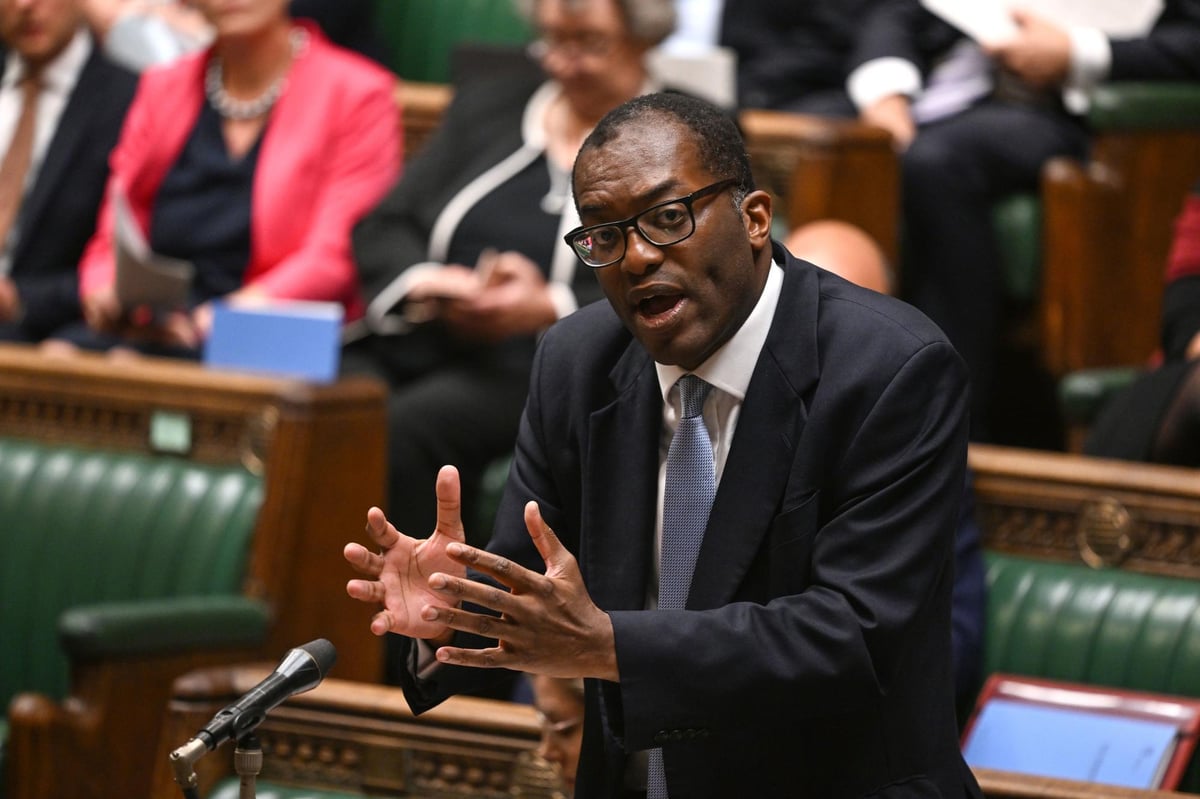 Kwasi Kwarteng, announcing the government’s new economic policy yesterday, said tax cuts are ‘essential to solving the growth conundrum’ as he confirmed plans to scrap the cap on bankers’ bonuses while adding restrictions on the social protection system.

But the pound plunged to a new 37-year low as ‘frightened’ traders swallowed the cost of the frenzy launched by Chancellor and Prime Minister Liz Truss two years before the general election.

Shadow Chancellor Rachel Reeves said the strategy amounted to “an admission of 12 years of economic failure” under successive Tory governments.

EDITORIAL USE ONLY. NO SALE. NO ARCHIVING. NO MODIFICATION OR HANDLING. NO SOCIAL MEDIA USE UNLESS AGREED TO BY HOC PHOTOGRAPHY SERVICE. MANDATORY CREDIT: UK Parliament/Jessica Taylor Handout photo released by the UK Parliament of Chancellor of the Exchequer Kwasi Kwarteng delivering his mini budget to the House of Commons, London. Issue date: Wednesday September 23, 2022. See PA story POLITICS Budget. Photo credit should read: UK Parliament/Jessica Taylor/PA Wire NOTE TO EDITORS: This photo may only be used for editorial reporting purposes for the contemporaneous illustration of events, things or people in the image or facts mentioned in the caption. Reuse of the image may require additional permission from the copyright holder.

The MP for Leeds compared the Prime Minister and Mr Kwarteng to ‘two desperate gamblers in a casino chasing a losing run’.

Treasury estimates put tax cuts, including the promised reversal of the National Insurance hike and the scrapping of the corporation tax hike, at almost £45billion a year d 2026.

The package was announced a day after the Bank of England warned that the UK may already be in recession and raised interest rates to 2.25%.

This decision made government borrowing more expensive than at any time in the past 13 years.

Paul Johnson, the director of the IFS, said Mr Kwarteng’s ‘gambling with fiscal sustainability’ was the ‘biggest tax cut event since 1972’.

Amid soaring interest rates, he warned that the Bank of England would surely raise interest rates further in response to the package.

Mr Johnson said: “Early signs are that the markets – which will have to lend the money to fill the gap in the government’s budget plans – are unimpressed. It’s worrying.

Mr Johnson also warned it was ‘inconceivable’ that new public spending would not be announced unless the government allowed ‘further deterioration’ in public services.

“Presumably, this government would borrow for that too. Mr Kwarteng is not just betting on a new strategy, he is betting the house,” Mr Johnson said.

He warned that the package of tax cuts announced 50 years ago by then-Chancellor Anthony Barber under a stimulus for growth “had ended in disaster”.

Mr Kwarteng has pledged to lower debt as a percentage of GDP over the medium term, but the Treasury estimates the package would need to raise GDP by 1% on current forecasts every year for five years to cover the cost of further cuts of taxes. .

The Treasury said the total package would be funded by increasing borrowing by £72.4bn.

The IFS predicts that government borrowing could remain as high as £110bn a year, even after the massive energy support package expires in two years, and that future tax hikes or Spending cuts will be needed to pay the rising debt.

It is expected that there will be an official forecast by the Office for Budget Responsibility on the true cost of the policies and their impact on the economy before the end of the year.