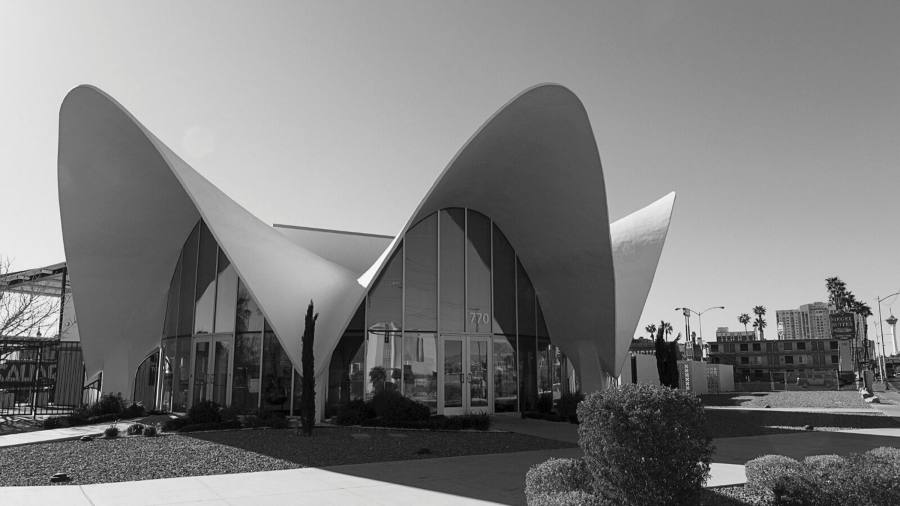 “Today I have sketched the preliminary plans for a grand country house to be created in one of the finest residential areas in the world,” architect Paul Revere Williams wrote in 1937 of a house that he was drawing for a wealthy client in Los Angeles. . “Sometimes I dreamed of living there. I could afford such a house. But tonight, leaving my office, I returned to my own cheap little house in an unrestricted and relatively undesirable part of town.[because]. . . I am a nigger.

Williams was the first licensed black architect west of the Mississippi and the first to be a member of the American Institute of Architects. (Even today, only 2% of registered architects in the United States identify as African American.) A favorite of Hollywood’s elite, he designed around 3,000 buildings, and while LA was his hometown, a exhibition of new photographs of his many projects in Las Vegas and Reno, at the Nevada Museum of Art, show that he also left his mark in this state.

Williams had to navigate the world he worked in with excessive care. A handsome man, he was always impeccably dressed. Inevitably the only African American in the room, he walked into meetings or around construction sites with his hands clasped behind his back, to avoid the difficult question of shaking hands. He learned to draw upside down so that customers could sit in front of him rather than next to him. Such understated elegance must have been exhausting. “He just had to work harder and be better,” says his granddaughter Karen E Hudson, “just like with African Americans then and now. He never failed to use every moment to advance his career.

Williams was born in Memphis in 1894 to a middle-class family. He was orphaned at the age of four – both his parents died of tuberculosis – but was adopted by a couple who clearly supported his later ambitions. He studied architecture in Los Angeles and by 1922 had started his own business. He did not adhere to any particular style: he designed Saks Fifth Avenue on Wilshire Boulevard with Art Deco precision and a modernist tennis club for Palm Springs partly embedded in a mountain. Its lush modernist extension at the Mediterranean-style Beverly Hills Hotel is still one of the city’s most glamorous sights — and its iconic signage is its own design.

Huge homes for celebrities such as Lucille Ball, Lon Chaney and Frank Sinatra tended towards colonial revivalist or Tudor. “For some architects, it’s their heritage to have built in a certain style,” says Carmen Beals, who curated the Nevada exhibit. “But his legacy was to provide homes the customer would love.” She suggests that it may be the fact that you cannot instantly identify a Williams building, as well as its breed, that has led to a relative lack of recognition today.

Janna Ireland, a 37-year-old photographer, certainly didn’t know much about Williams when she was approached in 2016 by architect Barbara Bestor, director of the Julius Shulman Institute at Woodbury University in Burbank, who wanted to make an exhibition of Williams’ work in Los Angeles. “I had heard the name,” says Ireland, “but as I began to document the buildings, the effect it had on the city became clearer, particularly through the private houses he built. What he created had an effect on what happened in a neighborhood.

Of approximately 300 homes and businesses he designed in Los Angeles, many helped create what is now known as the Platinum Triangle – the exclusive addresses in Beverly Hills, Bel Air and Holmby Hills. Williams eventually built her own home in 1951 in West Central LA at Lafayette Square, where prosperous black families lived. Eschewing the glamor he had lavished on his clients, his own property is far more modern, in the international style with four bedrooms, an open ground floor and ribbon windows.

Ireland’s approach was to focus on the architecture itself – its details, structure and materials. “It seemed logical to focus on his hand and his eye,” she says, speaking from her home in Eagle Rock, LA. “In my own work, I am interested in domestic life. But I wanted to show how he put things together. I think it also helped me gain access to private homes. People knew I wasn’t going to look in their closets or under their beds. Much like her predecessors, architectural photographers Judith Turner and Helene Binet, she created a world of detail and shadows and perfect geometries, where arches are beautiful ellipses and stairs are wide wooden structures and wrought iron.

In 2020, she is invited by Beals, who has just joined the Nevada Museum of Art, to do the same in Las Vegas and Reno. Beals, who had grown up in Houston in a community built by African-American architect John Saunders Chase, was particularly interested in Berkley Square, the first community built in Las Vegas for African Americans. Low Modern Homes were designed by Williams “so that people of African-American descent could afford their own homes,” Beals says. Funded by civil rights activist Thomas Berkley, it was opened for occupancy in 1954. “Nevada’s first black doctor had two homes there,” Beals continues, “one for himself, one for non-white artists came to perform in Las Vegas but were not allowed to stay in its hotels.

In Las Vegas, Williams’ buildings include the modernist A-shaped Cathedral of the Guardian Angel, with its triangular stained glass windows showing gambling scenes created by Isabel and Edith Piczek. There’s the futuristic La Concha Motel, a dazzling confection of intersecting parabolic shapes. (The La Concha lobby is now the entrance to the Neon Museum.) In Reno, there are cheap, easy-to-assemble prefab steel apartments painted to look like wood, as well as large brick houses and a resolutely neoclassical church.

In 2017, nearly 40 years after his death in 1980, Williams received the American Institute of Architects Gold Medal, the first African American to be so honored. “With some architects, it’s all about ego,” says Beals. “But I think Paul R Williams designed for people. He put his ego aside, he listened.

‘Janna Ireland on the Architectural Legacy of Paul Revere Williams in Nevada’, Nevada Museum of Art, Reno, through October 2 nevadaart.org