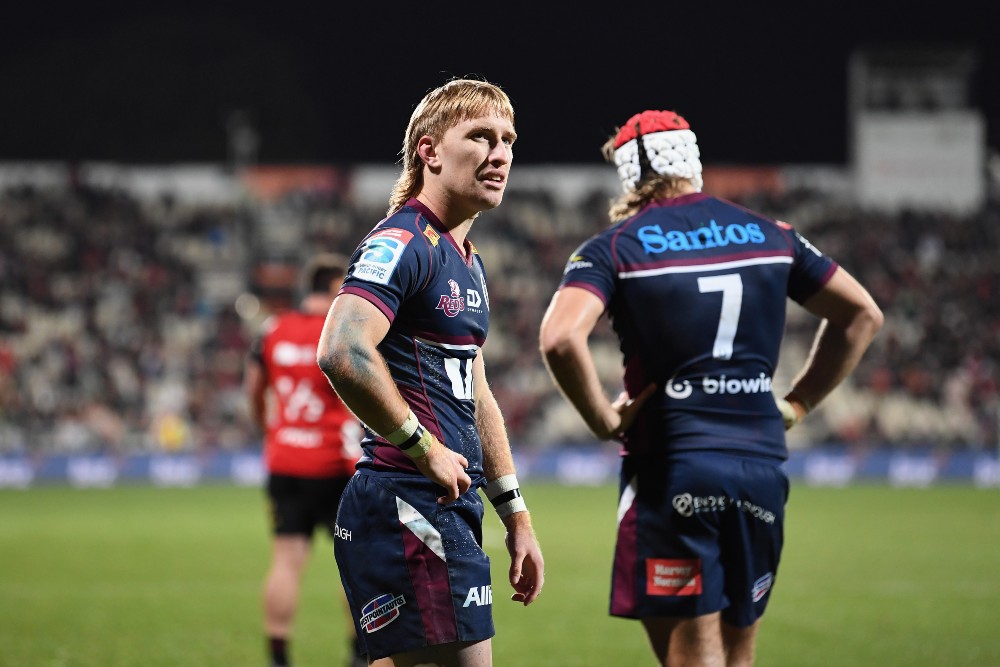 The big hits, biffo and giant-slaying mentality of Queensland’s Home State heritage have been nurtured to coach Brad Thorn’s eager underdogs all week in Christchurch.

The Queensland Reds turned their week in Christchurch into an ‘Origin-style camp’ to set the perfect mood for Friday night’s sudden death quarter-final against the Crusaders.

Co-captain Tate McDermott said being ranked as 20-point underdogs and the playful heckling of Kiwi locals daily only added to the team’s gritty mood.

“Nobody’s giving us a chance and that’s something we’ve really bounced back on,” McDermott said.

“Wherever you go (in Christchurch) someone has a little chat or wants a picture. It’s good to be in a rugby town and guys like Fraser (McReight) like to heckle back.”

It is much deeper. Thorn tapped into his own experience as a former State of Origin rugby league striker to flood the Reds with all the signals.

“It was a theme of the ‘State of Origin’ camp this week. It took us back to when Queensland was neglected. Nobody expects us to do anything, but we are absolutely ready to take on this daunting challenge,” said halfback McDermott.

“Every time we started a team meeting this week it was the pictures… the fights, the big hits, the atmosphere around Origin, what it means to be a Queenslander.

“They were the key elements.”

McDermott’s mule even matches the vibe.

Thorn particularly referenced the famous 1995 Origin series when the Maroons were huge underdogs without the Super League stars Brisbane Broncos.

The Maroons led 2-0 with a tremendous victory against the odds in Melbourne and went down in lore with a 3-0 sweep.

“It was the first year Wally Lewis was watching, not playing and ‘Fatty’ Vautin coaching. There was the ‘Queenslander’ call, the big fight in Melbourne and the Maroons winning,” McDermott said.

“It’s just good to have the similarities that we get into an absolute fight.”

Without Taniela Tupou and James O’Connor injured, it compares to the Reds struggling to upset Super Rugby Pacific without their greatest assets.

A striker from the current Queensland Origin squad could well prime the Reds even further on a Zoom call in Christchurch due to a timely Reds-Maroons link.

Team Origin head of strength and conditioning Andrew Croll has worked a stint in a rehab role with the Reds entering this season.

McDermott was quick to point out that watching a few classic Origin brawls fuels a mentality rather than a copycat strategy.

“You won’t see a biff but you’ll definitely see a bit of a niggle. Last week, once we said we weren’t taking a step back, we were a much better team,” McDermott said.

“The boys have a license to go out and give him a good rattle.”

The Reds can’t afford the poor discipline to go overboard with the number of yellow cards they’ve conceded this season. They were averaging one yellow card per game, like the worst disciplined in the competition, until a clean sheet in last week’s 28-15 loss to the Crusaders.

“Discipline…it’s important to us. My and Liam’s job (as co-captains) is to balance that, but we don’t want to wait for them to dictate,” McDermott added.

One thing is certain against a Crusaders side that will see the return of All Blacks ace Richie Mo’unga.

“We’re going to have to play our best foot to get a result and we have to go all the way to the 80,” McDermott said.

“We gained confidence from what we did in the second half against the Crusaders last week, but we have to put our kicks in order in terms of execution.”

Finally, McDermott expressed the team’s disappointment that Crusaders flanker Pablo Matera escaped with no more than a yellow card for the dangerous tackle that knocked Jordan Petaia onto his shoulder, neck and head.

“Whether he wants to do it or not, it’s disappointing. Saying that, he plays (Friday) and we have to get over it,” McDermott said.

“I guess that was my argument (on dangerous precedent) at the time you have the Sam Gilbert-Michael Hooper incident (ruled as a five-week ban).

“All we’re asking for is a little consistency so the boys know right and wrong.”

all you need to know