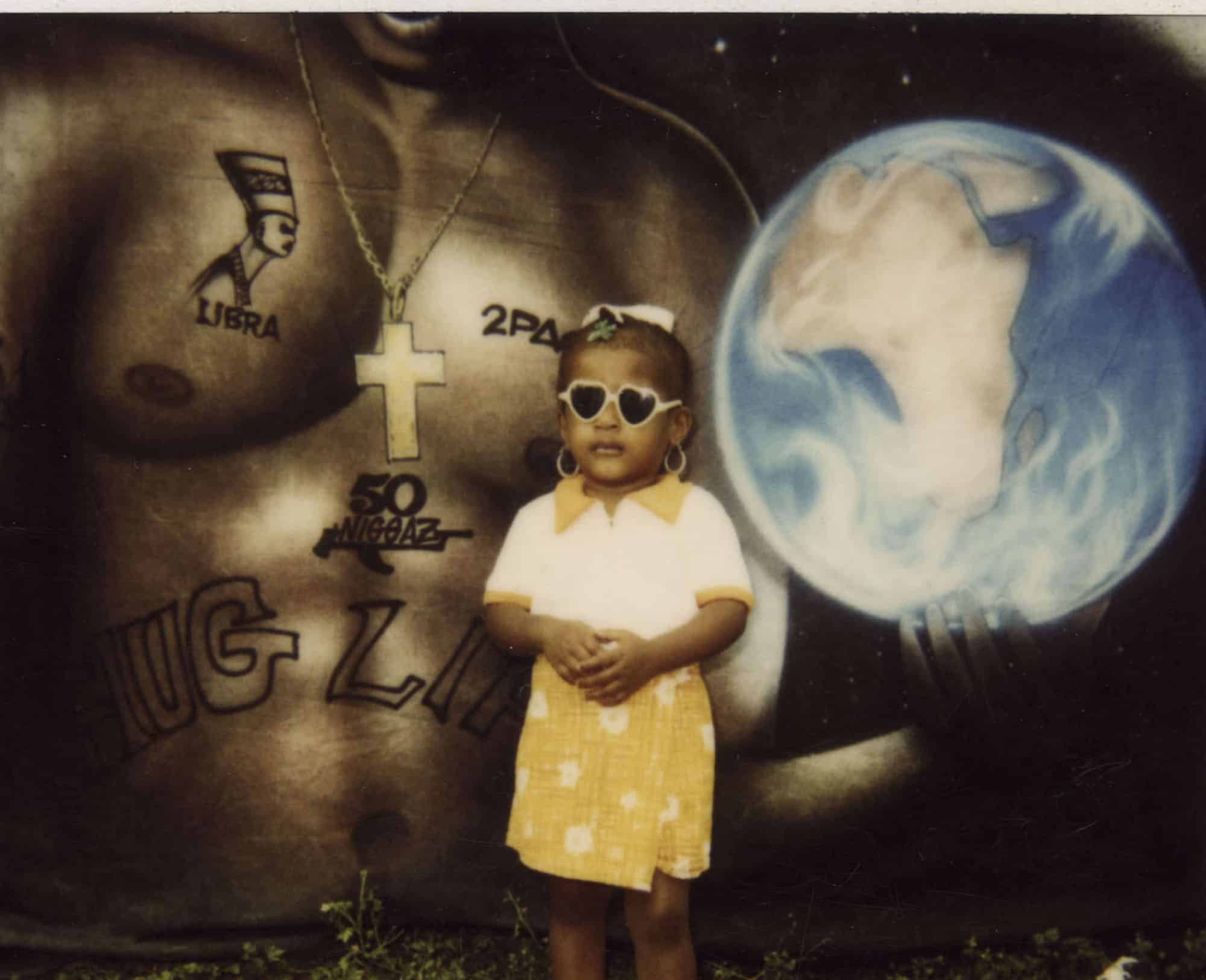 For more than three decades, Selwhyn Sthaddeus “Polo Silk” Terrell documented the people of his native New Orleans, preserving their distinctive contributions to music, style and culture. A singular figure helping to shape the aesthetics of black American photography throughout the 1980s and 1990s, Terrell established a mobile portrait studio that he took to the streets and clubs, chronicling the rise of hip hop and bouncy music from New Orleans.

Accompanied by Chelsey, his trusted Polaroid camera, Terrell produced instant prints for his clients, photographing them posed against airbrushed backdrops – painted by his cousin Otis Spears – that highlighted black icons, trademarks fashion, sports logos, popular songs and seasonal themes. From his archive, which includes portraits of Mardi Gras Indians, second-line bands, and groundbreaking hip-hop and bounce artists like Soulja Slim, Lil Wayne, Magnolia Shorty, Cheeky Blakk, 5th Ward Weebie, and Big Freedia, who recently appeared on “Break My Soul,” the lead single from Beyoncé’s new album, Renaissance—Terrell says, “It’s a blessing. My mom said it was already planned, that ever since I was born I’ve been groomed for greatness.

And his mother was not mistaken. Now 58, Terrell has become an integral member of the community, his photographs tracing family lines across generations and preserving the memories of those who have since died, long before their time. Now a grandfather himself, Terrell shares his work with young and old in his new exhibition, Picture Man: Portraits by Polo Silkwhich brings together more than 35 images made between 1987 and 2007 that illustrate his contributions to photography, culture and history.

Growing up in the 1960s and 1970s in New Orleans, Selwhyn Sthaddeus “Polo Silk” Terrell grew up during a golden age. “It was a time when the villages raised the family. Everyone knew everyone. If a neighbor saw you doing something [wrong], they were able to discipline you,” he said. “Kids were playing in the street, jumping rope, playing football, baseball and cool cans. You sit outside your porch late at night and are in church on Sunday. It was an incredible moment. It was special.

Terrell’s love for photography began at home when he was a young boy. His grandmother, mother and aunts regularly framed portraits of loved ones and hung them on the walls, creating impromptu galleries and archives of their ancestors. “Something always drew me to these images,” Terrell recalls those formative years when portraiture was used almost exclusively to record milestones. He was also drawn to popular magazines of the time like Ebony and Jetwhich chronicles the culture and life of black Americans, as well as Sports Illustratedwhose vivid use of photography made the stories infinitely more engaging and accessible.

Terrell never thought he would become a photographer, but fate had other plans for the teenager as he came of age. After taking a photography course at the Boys Club, he took up photography in 1986, just as hip hop was beginning to dominate the local scene. A local rapper named Warren Mayes had his own club, which featured a photo setup. It was then that lightning struck. Terrell and his friends had started a teen club called Club Adidas on Canal Street and realized they could do the same. They set up a room in the club for photo shoots, designed to look like a bedroom with shoeboxes, rap magazines, hip-hop posters, a bookcase and a wicker chair for posing. They added a backdrop and the room was complete. Terrell started doing portraits and never looked back.

Hip hop quickly became the voice of a generation. Terrell tried his hand at rapping, but soon realized it wasn’t meant to be. “I was in the mirror thinking I’m LL Cool J, then I met my friends as Soldier Slim,” he says. “I’m not a rapper. I’ll stick to photography.

But no matter what form it took, hip hop culture was all about style and pride. “Rap was boastful,” Terrell recalls of the artists who lent credibility to luxury brands on the street. While Dapper Dan created couture leather ensembles appropriating Gucci, Louis Vuitton and MGM logos, Terrell adopted his own style, donning head-to-toe Ralph Lauren Polo gear and giving it the perfect touch of cool. . Continuing the long-standing black American tradition of transforming upper-class status symbols into the hottest street styles, as brilliantly demonstrated in the recent book Black Ivy: The Birth of CoolTerrell has become famous for his signature looks, adopting the name “Polo Silk” as a statement in its own right.

“Coming from the projects, we didn’t have much,” Terrell recalled, noting that his parents often worked two or three jobs just to pay the bills. It was important to look your best when going out on the town at night. “I came to a time when mom and dad worked hard all week and on the weekends we watched them get dressed to go out to the club. We had hip hop from New York, but New Orleans has always put his own spin on things. When you could get Polo, you could stick your head out because it was good; it was the high-level clothes that made you feel special.

Growing up in New Orleans, Selwhyn Sthaddeus “Polo Silk” Terrell’s roots run deep. His father was a member of the Young Men Olympians and other members of the Masked Indian club family. It was only natural that his photography practice became an extension of his love for the community that elevated him to become one of the most influential artists of his generation. For the past 35 years, Terrell has navigated the tight-knit city, interacting with residents from different neighborhoods and creating a space that brought out the best in the city.

The author of the 2017 book Pop That Thang, a pictorial history of music and the people closest to his heart, Terrell gets to work. His days start at ten in the morning and can last until sunrise the next day, hitting the clubs five or six nights a week. By working such hours, Terrell has created an archive that goes beyond mere art, becoming a record of the people before Hurricane Katrina destroyed countless lives. The devastating storm killed and displaced thousands of people, literally taking away the photographic history of people whose homes were destroyed in its wake.

At the same time, the drug epidemic has taken its toll as waves of addiction, gun violence and incarceration have torn families apart. Terrell’s portraits bear witness to all that has been lost. “I call it a blessing and a curse because there are so many people I’ve photographed who aren’t here now,” he said, pointing to New Orleans stats like the murder capital of America in 2022. For the past 20 yearsthe city performed well above the national average, which makes Terrell’s photographs all the more meaningful.

After a good friend of his passed away, Terrell made a bracelet with his photographs for his friend’s mother to honor her on Mother’s Day. “I knew she took it badly,” he says. “It’s worth it, putting that smile on his face. After doing this for her, I went to a few other mothers who had lost everything to Katrina, and gave them bracelets with pictures of their children. It is a strong, resilient and loving city. A lot of people, I’m like family to them. People have given me the opportunity to photograph them and they have brought me to where I am. I’m always saying to people, ‘Thank you,’” explains Terrell, who has been there since the very beginning and has not finished yet.

Picture Man: Portraits by Polo Silk is on view at the New Orleans Museum of Art until January 8, 2023.