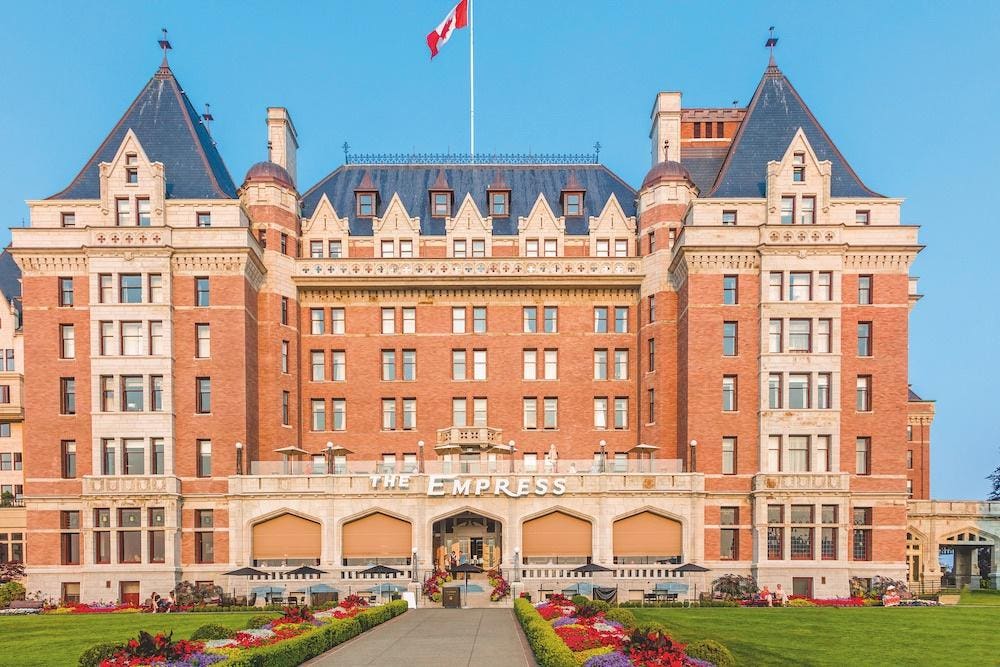 Many travelers have fond memories of visits to one or more of the 80 Fairmont hotels and resorts dotted around the world, each with a unique style and personality. They are also places where generations of families and friends have gathered to celebrate special events, including holidays, weddings, milestone birthdays and anniversaries.

A new oversized table book, Fairmont, tall by nature (Skira, 2022), captures the rich history of Fairmont Hotels & Resorts in prose and imagery, telling the stories of the many people who helped create and shape the brand – founders, architects and guests who have included members of the royalty, statesmen and celebrities.

With a foreword written by Oscar-winning actress Susan Sarandon, the volume is divided into three sections: Origins, Architecture, and Soul.

The writers, world travelers Claire Wrathall and Claire-Marie Angelini-Thiennot, have done a masterful job of collecting and assembling more than 500 archival documents, period photos and posters, evocative illustrations and photographs that enrich text and help tell the Fairmont story. , which dates back to the late 1800s.

The roots of the now-global chain are strongly Canadian, resulting from the merger of the historic Canadian Pacific Railway’s railroad hotels and the original Fairmont hotels. Over time, other iconic properties have been added to the hotel portfolio (including those of Canadian National Railways), increasing in both number and geographic reach.

More recently, in 2016, Accor Hotels, one of the largest hotel groups in the world, acquired the Fairmont brand. But from the beginning and still today, the picturesque settings of Canadian properties, both rural and urban, combine luxury and nature. Each is also characterized by a strong sense of belonging.

“For a building to become a landmark, it must have architectural significance,” the authors write, introducing the “Architecture” section, which describes the influences of more than 300 years of architectural history. The styles of the Fairmont collection range from rustic to contemporary, including palaces and castles.

In this section, thumbnails are featured of some of the innovative architectural giants associated with the Fairmont portfolio. They’ve included French architect Jean Nouvel, who designed the Grand Hotel Geneva’s striking exterior; Frank Lloyd Wright, who lived at The Plaza in New York City from 1954 to 1959 when the Guggenheim Museum was being designed (while there he redesigned the interior of its suite, known as Taliesin III); Chinese-American IM Pei, who designed the 26-story tower that is now the Fairmont Singapore; and Japanese architect Minori Yamasaki, who designed the hotel now known as Fairmont Century Plaza.

The “Soul” section of the book is filled with photos and anecdotes from luminaries who have passed through the doors of Fairmont properties. Alfred Hitchcock was a “regular” at several hotels and featured them in several of his films. The Plaza, a hotel run by Fairmont, was the scene of Roger Thornhill’s kidnapping in North to northwest; Fairmont San Francisco appears in a scene from Vertigo; and Le Château Frontenac in Quebec (which opened in 1893), which appeared in I confess.

The Savoy in London, which opened in 1889, has hosted Queen Mary, Princesses Elizabeth and Margaret, Princess Diana and Queen Elizabeth II. More recently, Rihanna and Guccio Gucci were in the same hotel.

Fairmont, tall by nature will make a wonderful keepsake for anyone who has been lucky enough to have visited one of these properties, but will also be a welcome gift for someone who still has them on their to-do list.

Whether you’re reading the entire book or flipping through the pages, you’ll want to book a room at a Fairmont property.

What Putin’s Dogs Teach Us About Man