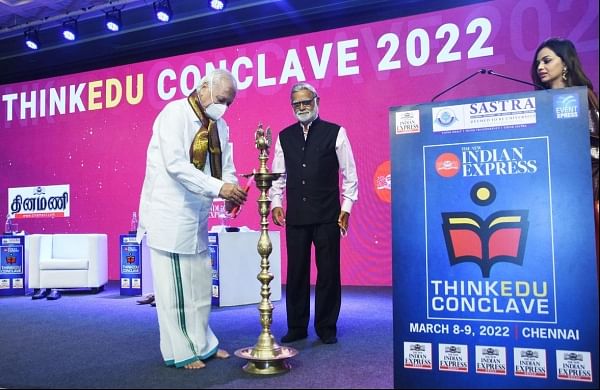 CHENNAI: Powerful speeches keeping attendees on the edge of their seats marked day two of the 10th annual ThinkEdu Conclave, hosted by TNIE, on Wednesday. It started with the speech of the Governor of Kerala and ended with the gritty and graceful story of the motivational speaker Malvika Iyer.
“There is no controversy (hijab); it is a conspiracy,” Kerala Governor Arif Mohammed Khan said as he opened the second day of the conclave. The event, which became hybrid this year, was a huge success with over 200 online participants and 359 students and delegates attending in person.

Like the first day, which saw eloquent speakers debate passionately until the bell, the second day of the conclave witnessed many lively discussions. While Tamil Nadu Finance Minister Dr Palanivel Thiaga Rajan in a roundtable with former Planning Commission Chairman Dr Montek Singh Ahluwalia said whatever the state wants, it is fairness, predictability and a good partnership with the Centre; Chief Economic Adviser Dr V Anantha Nageswaran said the situation in war-torn Ukraine had aggravated the economic crisis from which India had just recovered.

After Dr. K Ponmudy of DMK rejected the idea of ​​an exam as NEET on day one, Congressman Manish Tewari on day two said that since the introduction of NEET, college tuition of private medicine have been multiplied by six. Not only politicians, but business figures such as Gautam Adani and Tata Steel’s TV Narendran joined the conclave virtually. Educators and thinkers such as AICTE President Dr Anil Sahasrabudhe, Dr Santishree D Pandit of JNU VC and Chairman of the Prime Minister’s Economic Advisory Council Bibek Debroy also graced the event.