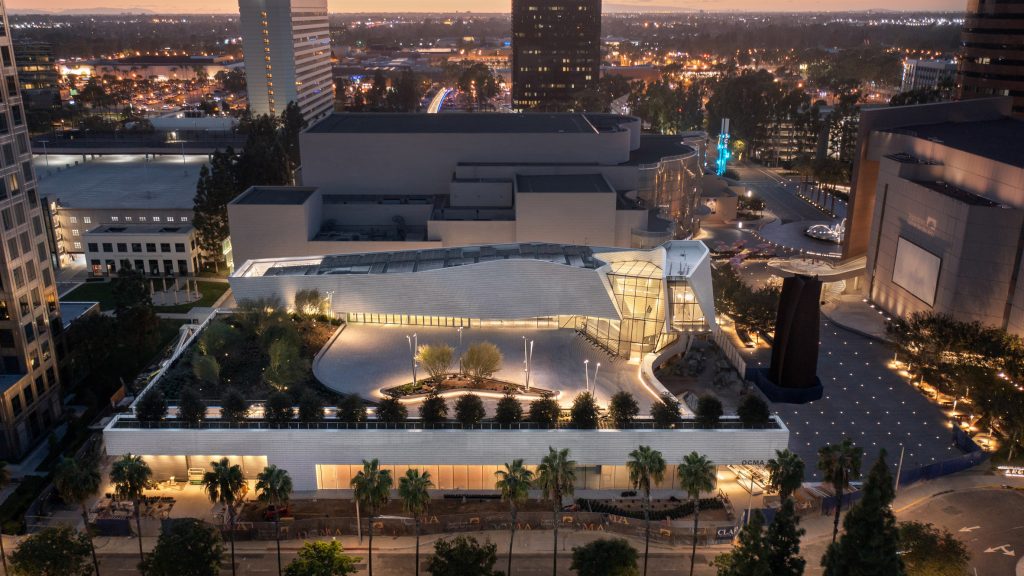 The 53,000-square-foot (4,924-square-meter) museum features a set of galleries wrapped around a large outdoor terrace with public steps leading up from the sidewalk.

The multi-story Orange County Museum of Art (OCMA) is located at the Segerstrom Center for the Arts – an arts complex in Costa Mesa.

Los Angeles-based Morphosis, which was founded by Pritzker Architecture Prize-winning architect Thom Mayne, designed the structure to have a “gradient of architectural intensity, from the complex shapes at the museum’s entrance to the rectilinear and flexible forms in the galleries”.

Morphosis chose to wrap the structure in a sculptural façade of white glazed terracotta paneling punctuated occasionally with windows that bring light into the galleries.

The concrete and steel structure has been exposed at times, with massive support beams crisscrossing from the ground to support the upper levels.

The main level surrounds the entire block and houses most of the gallery spaces. Part of this gallery space has been set up as a “showcase” according to the studio in order to open up the experience to the street and passers-by.

This level also includes the entrance hall with a mezzanine and the large atrium lit by windows.

At the main entrance, a massive staircase leads to a large public plaza that sits above the main level. The staircase is designed as a public space and passes under part of the facade.

The studio compared these steps to those of the Metropolitan Museum of Art in New York or the Spanish Steps of Rome.

“Connecting the museum to the arts complex’s Argyros Plaza and adjacent performance halls, the staircase will become an inviting gathering space for pedestrians and visitors alike,” Morphosis said.

The plaza level spans almost the entire museum, and the company noted that it is equivalent to almost 70% of the building’s footprint.

The space was designed to accommodate a sculpture garden, be an extension of the galleries and host outdoor events. A café and a museum shop will be accessible from the terrace level.

“OCMA’s design represents a new model for museums based on public, urban and communal spaces with strong connections between indoors and outdoors,” said Brandon Welling, lead partner at Morphosis and Mayne. 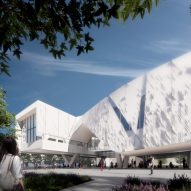 From the open space rises an asymmetrical, sculptural wing that contains the upper levels of the entrance atrium.

At the top of the atrium is the Education Pavilion, which will contain spaces for educational programming and a performance space that overlooks the terrace level through floor-to-ceiling glazing.

The museum – founded in 1984 – will hold a variety of temporary exhibitions that feature the works of artists, architects and designers as well as a permanent collection.

The designs for the museum were proposed in 2015 and construction began in 2019. The museum opened in October 2022.

Other Morphosis projects include an asymmetrical skyscraper in Shenzhen and the Emerson College campus in Los Angeles.

Photography is by Mike Kelley, unless otherwise noted.

“We wanted to value and document working-class culture”: the photography of Chris Killip and Graham Smith | Photography