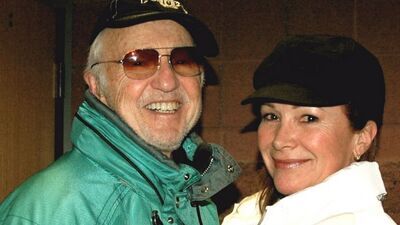 Today we honor him by looking back at some of Roger’s most memorable reporting on Haskell, beginning with his interview with him on August 10, 1969. Haskell had already made a name for himself as an Oscar-winning cinematographer of “Who’s Fear of Virginia Woolf?”, before directing his own groundbreaking feature, 1969’s “Medium Cool,” a narrative effort that filmed famous scenes during the violence that erupted at the 1968 Democratic National Convention in Chicago, in which a TV reporter (played by Robert Forster) finds himself in over his head. Roger wrote that “Medium Cool” was “the best movie ever made in Chicago. […] but it’s no more a “Chicago movie” than it is about politics, hippies, cops, violence, sex, poverty, black activists, or its other subjects. It’s a film about the nature of communication, about the nuances of meaning that can be superimposed on the face of “reality”.

During their conversation, Haskell argued that in fact, nothing is “real”, noting: “When you take a camera down Michigan Avenue and point it at what’s going on, you still don’t show the “reality.” You show this very seductive area that is in front of your camera. But there is another element in the film. It has something to do with the professional, “just doing your job”. The movie opens with this shot of the crash on Outer Drive, and the two TV guys first photograph it, then report it to the police. Their work comes before their involvement. This “just doing my job” thing almost became a joke during the Nuremberg trials. But it is now an integral part of our lives. There are people with nice suits, air-conditioned offices, grammatical English, who use their education to plan the end of the world, the destruction of people. I mean literally. One of the things we need to sort out, I think, is whether ‘professionalism’ takes precedence over individual social responsibility.”

In Roger’s four-star review of “Medium Cool”, he wrote: “Conventional cinematic plots telegraph each other because we all know the basic genres and typical characters. Haskell Wexler’s ‘Medium Cool’ Is One of Many New Films That Knows These Things About Theater Audiences […] Of the bunch, “Medium Cool” is probably the best. Maybe it’s because Wexler, for most of his career, was a very good cinematographer, and so he was trained to see film in terms of images, not dialogue and direction. ‘story. […] “Medium Cool” is ultimately so important and absorbing because of the way Wexler weaves all of these elements together. He made an almost perfect example of the new film. Because we’re so aware that this is a movie, it feels more relevant and real than the slick fictional surface of, say, ‘midnight cowboy.'” ‘Medium Cool’ will then be screened at Ebertfest in 2003, followed by a Q&A between Roger and Haskell.