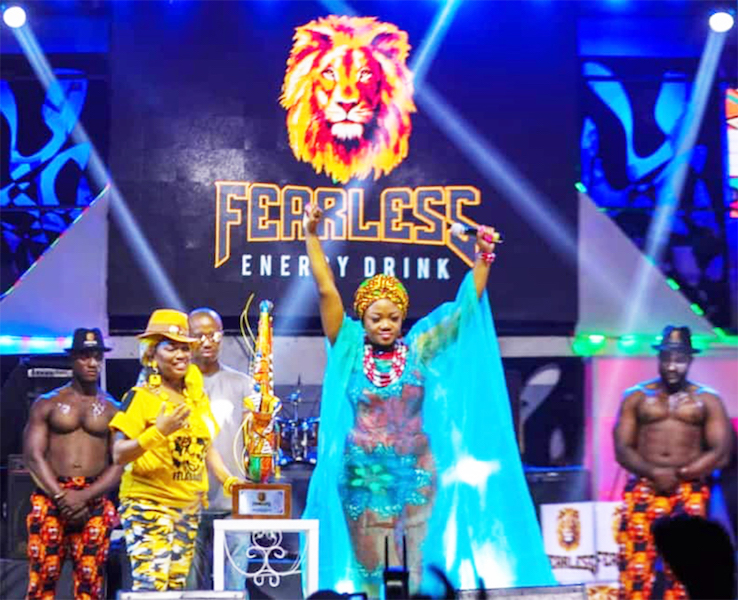 For Fela, a posthumous honor at Felabration 2021

Boluwatife Adedugbe was a spectacle no one had seen coming. With her Erica Badu-style headband, she moved majestically to the fully lit Felabration stage that had paraded in her final headlining days such as May D, Bella Schmurda, Kayefi, Femi and Seun Anikulapo. -Kuti, Made Kuti, Kafi the dancer who accompanied the master Koko, D’Banj in his two hour performance.

But Adedugbe was not there to sing. She is Brand Manager for Rite Foods Ltd, one of Felabration’s sponsors. Her poetic lines in praise of Afrobeat pioneer Fela Anikulapo-Kuti also set the tone for what was to follow. She took center stage as a true performer by presenting the Fearless post-humous Award, by Fearless Energy drink, from the Rite Foods stable to the late Afrobeat King. He was received by the eldest of Fela’s children, Yeni Anikulapo-Kuti and his younger brother Kunle Anikulapo-Kuti, during the grand finale of the 2021 edition of Felabration at the famous African shrine of Agidingbi, Ikeja, Lagos.

The posthumous Fela Prize by Fearless Energy Drink is articulated on the story of courage through the life and times of the legendary musician. The brand seeks to celebrate people of extraordinary courage in all walks of life, and Fela has been recognized as the most fearless man, in ideology, performance as well as leadership and continues to influence generations long after his birth. died in 1997.

Felabration institutionalized the celebration of Fela across the world and in Lagos where it all began, other groups of the seven-day concert have sprung up: one in Broad Street (Freedom Park), another in Lekki (various venues) and a new one on Victoria Island. The Afrikan Shrine still remains the most energetic place where the street credibility of the individual artist is tested. As usual, many budding singers flooded the Afrikan shrine, defying the heavy downpour to watch and perform their songs. A handful of them experimented with remixes of popular Fela classics such as “Zombie” and “Lady” using other genres to accentuate the beauty of the Afrobeat originals.

But the sound seems to be better in other places where there are less people. One example is Kayefi who struggled to be heard while performing the song “Ghetto” at the shrine. She had performed the same song the night before at Freedom Park during the Amazons; Night of Felabration to thunderous applause. But during the grand finale, her beautiful voice was obscured by the sound of the vuvuzela and the DJ acting as the self-proclaimed guardian on stage. The Afrikan Shrine is more than just a concert hall during Felabration. It’s a cultural picnic where food and craft vendors mingle with the public and foreign visitors reconnect with old friends and associates. Right next to the main stage would be a huge flat screen photography projector where images are edited using the various Felabration models as the background. And the puffs continued to float in the air as if to pay homage to the legend itself.

Arguably the best performance of the night is two-time Grammy nominee Femi Anikulapo-Kuti, who captured her name and musical heritage well. As you might expect, his show was well timed, well paced, as the whole reflected class and professionalism. Rolling down hits like “Wonder Wonder”, “Dem Bobo”, “Truth Don Die” and “Sorry Sorry O”, he ended with the signature double black fist salute that was reproduced throughout the room, regardless of the area. seats.

At a time when many Nigerian music stars are touring the world, Nigerian music fans have been eagerly awaiting the surprise package that the seven-day concert would offer in its grand finale. Fearless did Fela that honor and that was the real vibe of the Felabration.

In retrospect, Fela fearlessly composed songs like “Suffering and Smiling”, “Sorrow”, “Tears and Blood” and “Unknown Soldier” as a form of political resistance against the oppressive and dictatorial regime. Songs such as “Colonial Mentality”, “Teacher Don’t Teach Me Nonsense” and “Mr. Follow Follow” among others were also composed to propagate his Pan-African identity while rejecting the damaging effect of post-colonial influences in Africa: Through his music he created a cultural crossroads to which other parts of the world could connect, against tyranny, for a better society.

In this context, Rite Foods General Manager Seleem Adegunwa pointed out that Fela deserves such an honor for the impact he has had in music, having fought for a good cause for the people through his songs. Fela, he says, resonates with the Fearless brand’s motivation for positive energy, courage, leadership and initiative.