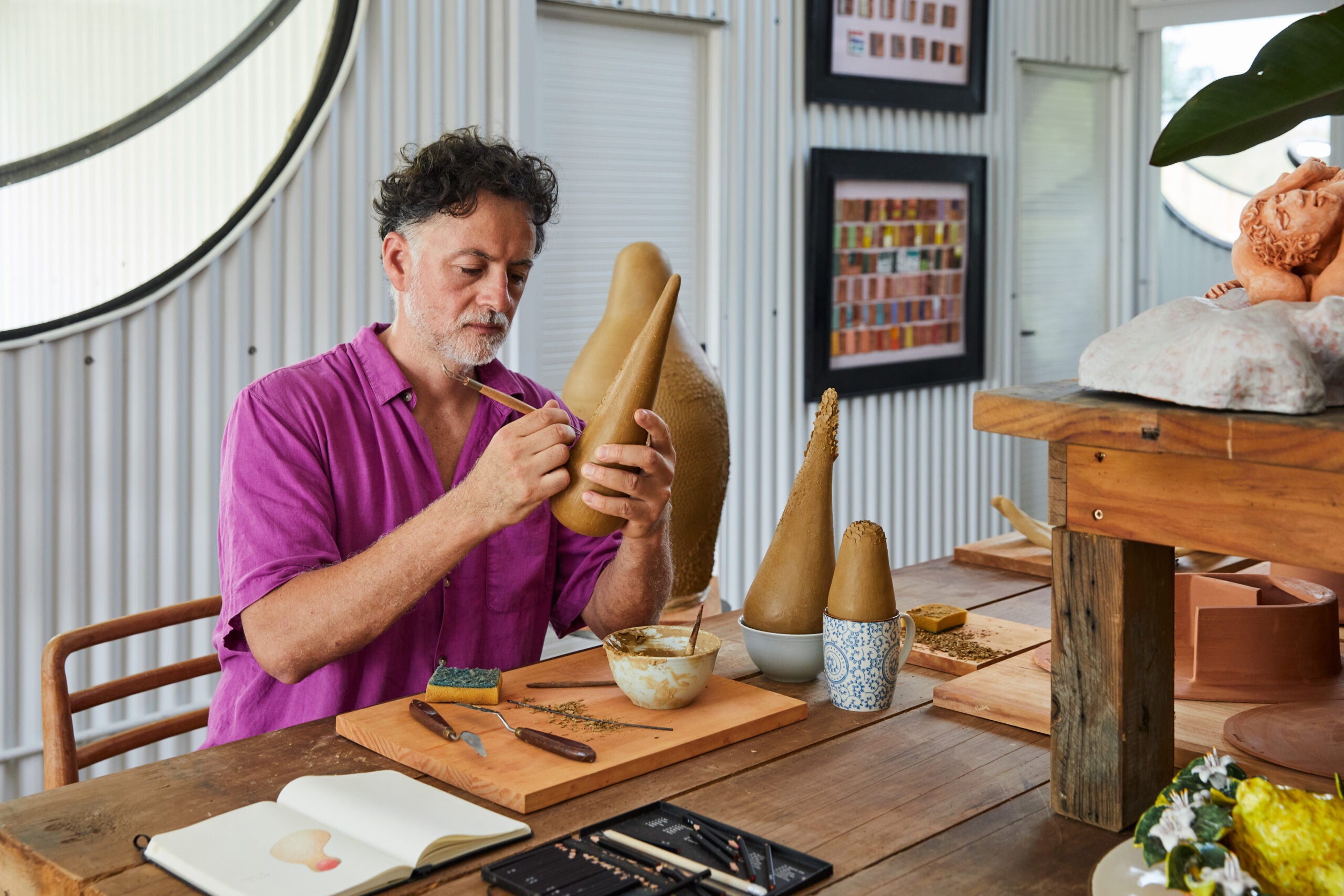 Last summer, when Fernando Aciar arrived in the rural village of Garzón (population: around 200) along the Uruguayan coast, a sunny studio and a well-equipped kitchen awaited him. At the artist residency set up by renowned Argentinian chef and restaurateur Francis Mallmann, we expect no less. After all, the marriage of food and craftsmanship is evident in the many Mallmann restaurants around the world – Los Fuegos in Miami and Siete Fuegos in Mendoza, Argentina, to name a few – where he carefully designs physical spaces that balance rustic patina with simple elegance. To help him create tableware and decor for his establishments, Mallmann built a studio near his secluded El Garzón hotel and restaurant to host artists from far and wide.

Aciar, a Brooklyn-based Argentine chef and longtime ceramicist who worked with Mallmann for several years, is the latest creative to move into the residence. He opened the cozy West Village haunt OCAFÉ in New York in 2011 and launched her own design brand fefostudio three years later, still drawn to accessible textures and shapes that combine function and aesthetics. “They are very easy to understand,” he says of his pieces. “When you hold them, they look familiar.” Favoring neutral-hued clays with hints of color derived from natural dyes, Aciar turns to everyday objects like plants, stones and of course food to inform his creations.

The diversity of textures in the pantry inspired Aciar to experiment with different shapes for his ceramics. Photograph by Ricardo Labougle

“I was surrounded by so much food in the studio,” he says of Garzón’s space, which is bisected by a large work table, with ceramic tools on one side. and a kitchen on the other. “They served as a model for me to start playing.” In the pantry, Aciar found glass containers containing all varieties of cereals, beans and pasta. When he opened a box of orecchiette, he immediately recalled learning how to make it from scratch in 1997 while working at Mallmann’s 1884 restaurant in Mendoza, Argentina. Inspired by pasta and his memory, Aciar decided to make a wall lamp in the shape of an orecchiette that Mallmann could potentially place in one of his restaurants.

Furnished in Mallmann’s signature aesthetic, the artist’s studio is an oasis for creatives to explore their craft. Photograph by Ricardo Labougle

Perhaps the elemental nature of Mallman’s spaces stems from his favored culinary approach, which stems from Patagonian native fire-cooking techniques and often requires little more than an open flame. The immediacy of this primordial cooking method captivates the senses on a primal level and keeps people in the here and now. Diners feeling comfortable and present can elevate what Mallmann considers the most important aspect of a meal: “The only reason we eat and drink with friends, lovers, family, is is because we want to talk. We want to trade.

Married Ducate, a French ceramist and designer, first visited Garzón in 2007 to develop pieces commissioned for Mallmann and worked from the studio several times. She points out that flames are essential for both fire cooking and ceramic making, which she says makes chefs and potters share similar movements and mindsets. “You don’t know what color it will be after a night of cooking, so it’s very mysterious,” she explains, drawing the parallel that open-fire cooking can also create mercurial conditions.

Lemons and other plants are a recurring theme in Mallmann’s tablescape designs. Photograph by Ricardo Labougle

Like Aciar, Ducaté found inspiration during his residencies in the secluded studio, where the lush countryside teems with flora. After noticing that Mallman had a particular fondness for lemons, she created citrus-shaped ceramics. When assembled into a metal structure, the pieces will turn into a decorative chandelier. “As humans, we experience nature through all of our senses, and nature enhances our days, our hours,” says Mallmann, who will publish a new cookbook later this year dedicated to cooking plants on a real fire.

Since his teenage years, Aciar (left) has worked in several Mallmann kitchens. Photograph by Ricardo Labougle

As a fellow chef, Aciar particularly embraces the philosophy of combining food with craftsmanship, and continues to do so at his home in New York. For his Brazilian-inspired OCAFE, which serves coffee and pastries like pão de queijo, he designed the furniture and tableware himself. In 2019, he launched OSTUDIO, a community space comprised of art studios and work booths for creatives that will open its own OCAFE location in April, as well as a wine bar that will offer residencies for chefs to experiment with different styles. and techniques.

“We need to be more creative in how we present food. We need to be fully involved in the storytelling,” says Aciar. By combining artistic and culinary creation under one roof, he hopes to bring together the best of both worlds, which Mallmann has encouraged him to do since Aciar began working with him. And that tradition continues: “We will continue to invite artists in residence to produce things inspired by the beauty of this small ghost town,” adds Mallmann, referring to the Garzón studio. “It is a great joy for me.”