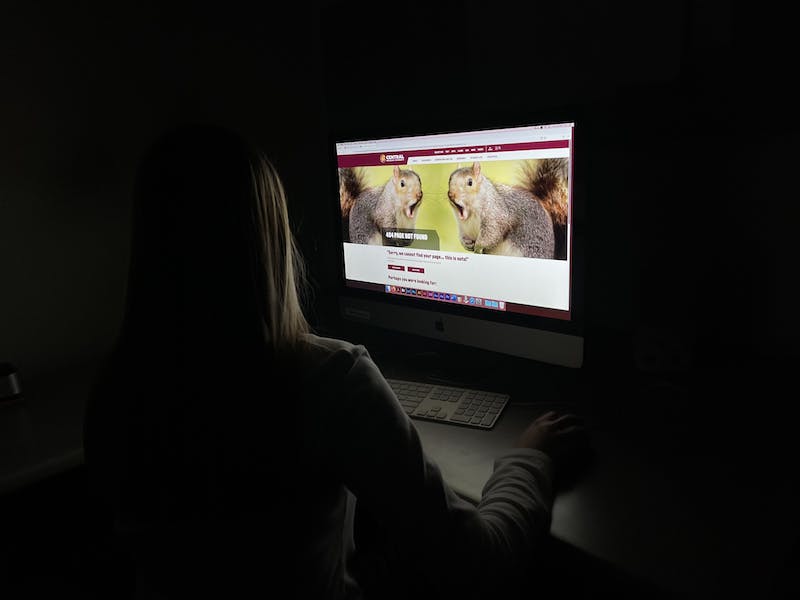 On the first day of the Spring 2022 semester, students were greeted by a few too many squirrels for January.

Instead of climbing trees around campus, they appeared on error messages on the newly redesigned cmich.edu website. After about the sixth or seventh image of a panting squirrel, it was clear that something was really crazy.

Reports of missing content, broken links and crashes flooded social media. All of the marketing information was displayed correctly, but things like event calendars, apps, and other pages that students visited daily were missing.

At the Academic Senate meeting on January 18, faculty expressed shock and disappointment at the state of the website.

“At a time of declining enrollment, this is a mistake we cannot afford,” Sen. John Allen said at the Jan. 18 meeting. “It’s a terribly under-prepared website and I think the students recognized that.”

He’s right, we did. It wasn’t hard to notice.

The question is: why put a website online that is not 100% complete and functional? Did we get our money’s worth for the $4.5 million we budgeted for this project?

It’s no surprise that issues with the website took up much of the conversation at the Academic Senate meeting. What was surprising was the tone of the response given to the professors by the vice-president of marketing and communications, John Veilleux.

After several faculty members raised concerns about the website — including one that flagged missing information for incoming graduate students — many faculty members said Veilleux’s comments were dismissive of criticism and border on criticism. derision.

He said professors were expected to communicate with their “departmental collaborators” to transfer content to the new website. He compared it to students turning in their homework late.

It was an odd comparison.

The Academic Senate meeting should have been the administration to reassure professors and provide them with solutions – at the very least put them in touch with the right people. Instead, he was pointing.

We are three weeks into the semester.

While things have certainly improved since the first day of classes, there are still glaring issues.

A line of communication should be established to resolve the remaining website issues as soon as possible.

University Communications has already taken a step in the right direction by sending an email to campus on January 24 with instructions for reporting functionality issues.

According to the email, CMU students, faculty, and staff can report issues to the ILO Helpdesk via an online form. The email also included a list of website contributors that professors could consult about the missing content.

Too bad this information was not brought to the meeting as a solution for frustrated teachers.