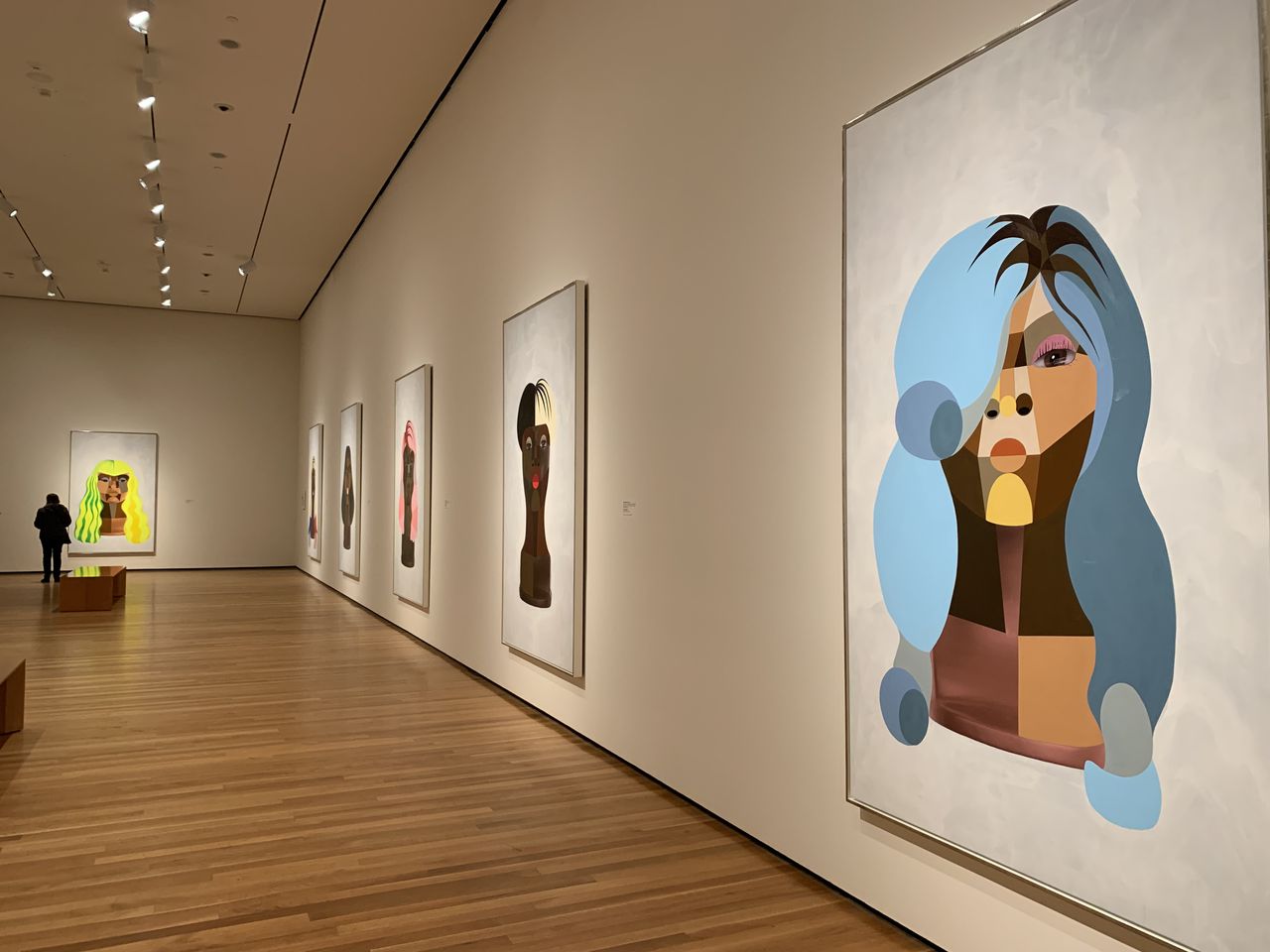 CLEVELAND, Ohio — Black American artists have often depicted racial injustice through images of conflict and suffering. Derrick Adams, a highly acclaimed mid-career New York artist whose work is the subject of an elegant and alluring exhibition at the Cleveland Museum of Art, took a different path.

The 52-year-old multidisciplinary artist portrays black life through ravishingly beautiful images that are infused with his deep knowledge of art history and a commitment to visual thinking and art making. very refined objects.

Adams’ work certainly draws attention to inequality and cultural blindness in a predominantly white society, but it does so subtly, in a way that feels celebratory and affirmative rather than angry and accusatory. Joy is a word often associated with his work.

All of these qualities are on full display in “LOOKS,” a deeply satisfying exhibit on view through Sunday, May 29 in the East Wing Photograph Gallery of the Cleveland Museum of Art.

Co-curated by the museum’s curator of photography, Barbara Tannenbaum, and Ellen Rudolph, curator and senior director of the Cleveland Clinic’s art program, the exhibition focuses on nine large-scale canvases in which Adams interprets various wig styles glimpsed on the mannequin. heads on display in store windows in the Brooklyn, New York, neighborhood where he lives.

The wigs depicted in the paintings include a sassy-looking cropped style in black and white, a fiery rainbow, a look with cascading braids that fall in a shocking pink cascade, and a softer number with flowing curves in subtle earth tones.

The paintings and their evolution have a great personal story, and they manifest a powerful understanding of what it takes physically to create a well-made work of art.

They are also a frank celebration of popular notions of black beauty and style. As such, they elevate a subject that some might consider downgraded. But they also point out that popular fashions pioneered among minority groups have tended to become mainstream in a market hungry for new styles, or “LOOKS,” as the show’s title says.

Regardless of how they are interpreted, Adams’ paintings are highly disciplined pictorial performances. They acquire an almost hieratic authority and an imposing presence that attracts attention.

Why are they in the photo gallery? Because Adams painted the wig styles and geometrically abstract facial features in acrylic paint on large-scale photographic prints of the mannequin heads made directly on canvas in the first instance. Painted areas layered over and around the photos then create unified hybrids that mask their roots, much like wigs do.

Represented by Adams through flat areas of color and pattern, the wigs are combined with the sharp, hard-edged areas of color that outline the facial features of mannequin heads. The lips and nostrils become circles; cheeks, eyebrows and chins become faceted polygons.

The underlying photographs are never fully hidden. Sometimes parts of them around the nostrils or chins of mannequin heads peek through the surrounding layers of paint, creating a subtle hide-and-seek surface that is layered and bold but also visually tight and flat – not an easy to pull off effect.

A delightful detail is that Adams outlines the lashes on the buds by painting flat areas of color around the underlying lashes in the photos. The unpainted eyelash-like silhouettes are defined by flat areas of color as if they had been chiseled out of a sheet of paper.

The interactions between layers in Adams’ paintings attract and hold attention while resisting attempts to decipher how they are made.

The net result is a high-impact sense of wholeness, accentuated by the soft sheen of a matte acrylic medium that Adams brushed onto the paints surface, creating loose, shimmering marks that belie the tight, hard flatness of the layers. paint. just below this outer surface.

In form and style, Adams’ paintings embody a sophisticated reinterpretation of influences from modern and contemporary classical art that range from the African-influenced cubism of Pablo Picasso to the harsh abstractions of the Color Field painter Ellsworth Kelly, and minimalism. stark geometric artwork by conceptual artist Sol LeWitt.

In his website biography, Adams also claims influences from Henri Matisse and Romare Bearden, the black American artist who became a master of collage, the cut-and-paste technique that Adams’ paintings often simulate at through areas of paint that act as cuts. paper.

An assistant professor at Brooklyn College of Art said in an interview that he gradually put his sensitivity to work on wigs and wig culture, without initially intending to. He was just giving free rein to his curiosity.

While usually walking to and from a tube station on Fulton Street, Adams said he regularly passed many wig shops. Like a 19th century Parisian flâneur intrigued by the urban scene that surrounds him, he gradually took an interest in it.

He finds himself photographing shop windows without any particular artistic purpose. Then he entered certain shops to learn more about their different styles from the women responsible for designing and creating them.

Intrigued, he eventually began making paintings based on the wigs and mannequin heads, initially concentrating on small studies on paper before working on the larger scale images on display at the museum.

Adams said his approach to creating art is rooted in his early experiences in Baltimore, where his stepfather was a musician and other relatives who were artists or collected African textiles and took him to see exhibits. in small neighborhood galleries.

Adams said he rarely visits the Walters Art Gallery or the Baltimore Museum of Art — the large, formal, predominantly white institutions he visits on occasional school trips. Instead, through personal and family connections, he developed an understanding of African American art history and artists such as Elizabeth Catlett and Jacob Lawrence.

His sights widened at the Pratt Institute in New York, where he earned a BFA in 1996, followed by an MFA at Columbia University in 2003.

Since then he has developed numerous bodies of work, often dealing with images of black leisure and pleasure. These explorations include a body of work inspired by The Green Book; a travel guide created in 1936 by postman Victor Hugo Green to advise black travelers on how to navigate Jim Crow America safely.

Adams devoted another series to the topic of “Floaters,” images of black men and women relaxing in pools on brightly colored inflatables.

The pool paintings function on one level as magnificent images of pleasure that resonate with classic modernist images of an imagined golden age, including Matisse’s late paper-cut images of nude bathers.

On another level, “Floaters” portrays black people as they claim their right to enjoyment in a country where public swimming pools have often been the scene of vicious racial strife.

Adams, who will discuss his work at the art museum on April 9, said he viewed his wig paintings as responses to notions of style and self-expression among working-class women who proclaim possession flamboyance of their bodies and the freedom to declare various identities. by changing their “appearance”.

“So you can decorate it,” he continued. “You could do piercings, you could do all these different things because it’s a statement, ‘It’s my body, I can do whatever I want with it. Here’s what I decide to do: wear a blue wig or an orange wig or a rainbow purple wig on the street.It’s an attention grabber.

This last comment also applies to the Adams paintings. Filtered through her sensibility and artistic process, they attract and hold attention while raising awareness of black fashion and visual culture in an inviting and yes, joyful way.

All of this and more in his work makes it easy to react with one word: Bravo.

Special event: Derrick Adams will discuss his work with exhibition co-curator Ellen Rudolph at 2 p.m. on Saturday, April 9 at the Cleveland Museum of Art. Free entry.

A Beginner’s Guide to Exposure, Aperture, Shutter, ISO and Metering