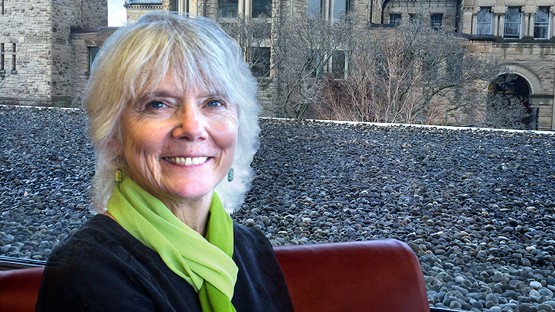 Anne R. Kenney, University Librarian Emeritus, a charismatic visionary who led the Cornell University Library through a decade of transformation and growth, died at Hospicare Ithaca on February 5. She was 72 years old.

From 2007 until his retirement in 2017, Kenney shaped a world-class academic library that strengthened Cornell’s community of scholars, expanded partnerships with institutions around the world, and raised the bar for standards of digitization, preservation and free access to research documents.

“Anne was a dear colleague to many of us. She transformed the Cornell Library with wit, intelligence, patience and a superb sense of humor,” Provost Michael Kotlikoff said. “Her passion was the library and the people who cherished her, and her untimely passing is a loss to all of us.”

Kenney was internationally recognized as a pioneer in the field of digitization, developing standards that were adopted by libraries and organizations around the world as early as the 1990s. She was also a prolific scholar, publishing over 50 articles and reports and co-author of three award-winning books on the preservation and digitization of library materials.

Highly sought after for his expertise, Kenney has led popular continuing education programs in digital imaging and digital preservation. She has also lectured on every continent except Antarctica and has consulted for research and national libraries in countries including China, Myanmar and Cuba.

For his contributions to librarianship, Kenney received the Hugh C. Atkinson Award in 2014, a high honor from the American Library Association.

Kenney was deeply revered in the Cornell community for championing the library as a vital partner for research, teaching, and scholarship.

“Members of the faculty library board have deeply appreciated Anne’s dedication to faculty concerns for teaching and research,” said Mary Beth Norton, Mary Donlon Alger Emeritus Professor of American History at the College. of Arts and Sciences and former Chair of the Faculty Library. Advice. “From projects of such significance as supporting arXiv or 2CUL’s collaboration with Columbia University Libraries, to providing books for faculty to department offices, Anne has always been responsive to faculty input. At the same time, she clung to her idea of ​​what would be best for the library. It was a pleasure to work closely with her. »

Along with her fierce intellectual curiosity and deep love for special collections, Kenney has also been credited with significantly expanding and promoting the library’s unique holdings. She was instrumental in the acquisition of the Loewentheil Family Collection of Photography, which includes a significant collection of images depicting black life from the 1860s to the 1960s. She was also instrumental in the acquisition by Cornell from the Photographic Archives of the New York Amsterdam News, one of the nation’s oldest black-owned and operated newspapers. In 2017, she co-curated the hugely popular exhibition “The bewitched world”, featuring the Cornell Witchcraft Collection.

“Anne has built a real fan club among alumni by hosting guest speakers and showcasing some of the library’s treasures in lounges across the country,” said Beth Anderson ’80, Cornell administrator and former chair of the Advisory Board of the library. “His pitch for crowdsourcing new electrical outlets for the AD White Library was one of Cornell’s most successful crowdsourcing projects. Advisory board members appreciated Anne’s ability to lead the library through significant change and her openness to a variety of ideas and opinions.

Kenney was also well-liked by library staff, particularly for her warm, down-to-earth style of communication, as evidenced by her weekly “Take One” emails to the library community.

“Anne was such a great writer. Everyone looked forward to reading her thoughts and stories in her Take One posts on Monday mornings,” said Michelle Eastman, executive assistant to the college librarian.

Kenney’s words were especially uplifting during difficult times, she said.

“I want to express my admiration and respect for all of you – you are doing a tremendous job in maintaining services and a positive outlook in this time of uncertainty,” Kenney wrote in December 2009, as the library faced budget cuts during the economic downturn. .

“Even with everything going on, I can’t imagine a better library system to run.”

Jose Beduya is a writer, editor, and social media coordinator for the Cornell University Library.