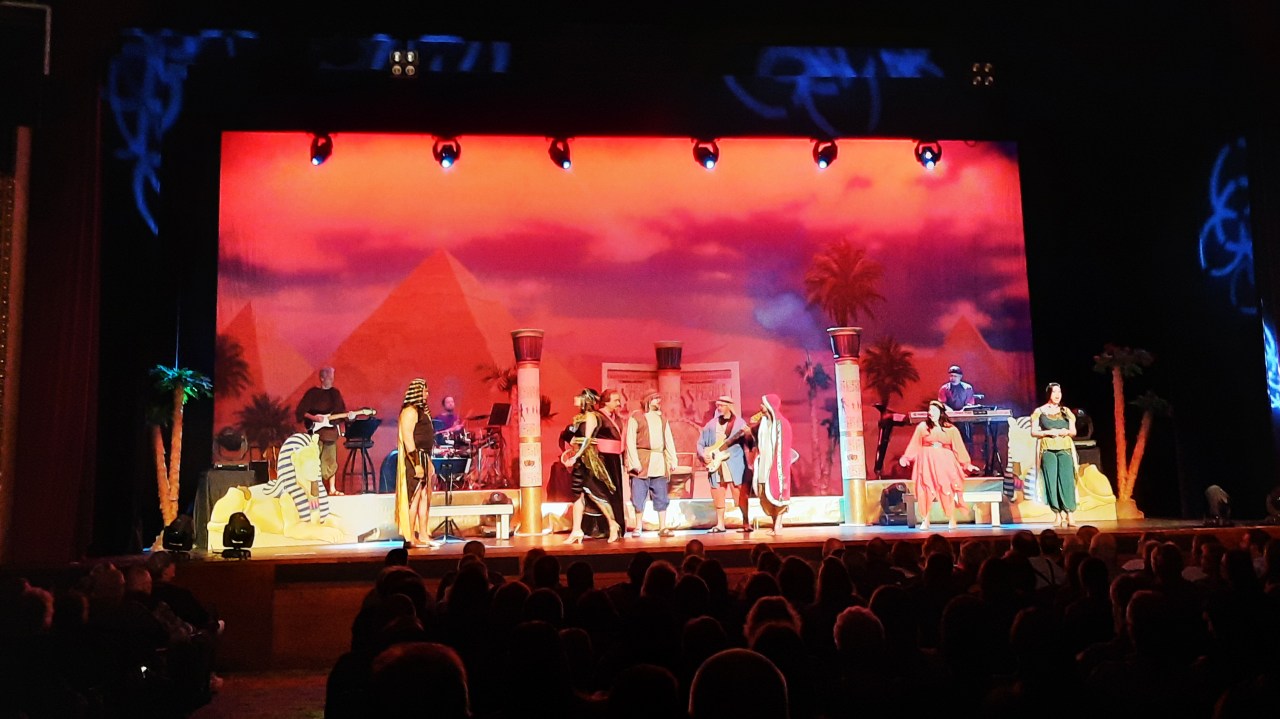 GREEN BAY, Wisconsin (WFRV) – The year is 1. Jesus Christ is approaching his first birthday. In Egypt, Pharaoh’s family is trying to find a way to mark the day.

It’s crazy for the story of Let Me Be Frank Productions 2021 edition of “A Frank’s Christmas”.

The performing troupe adds songs to the story. Most titles have been around for years and years. In this show, most are contemporary interpretations. The lyrics are mostly the same; the styles are of a rock kind of kind – which may explain the extra volume of the musical presentation of this show.

The show revolves around faith. Words and philosophies found in the church regularly surface. The namesake of the Frank Hermans troupe even makes claims that we should all get along and respect each other.

In its quest for originality in entertainment, Frank’s is once again a hit.

In this show there is a story as usual with that of Frank. But there are no strings – puns that lead to songs. There are discussions and jokes and the development of plots in the Pharaoh’s family, but then another Christmas song is performed.

The lineup seems to have this concept for the singers: What are some of your favorite artists’ Christmas songs that you would like to sing? Singers sing songs in the style in which they are comfortable. Included are the daring Jars of Clay for “O Little Town of Bethlehem” for Zach Hibbard among the younger performers and a powerful Elvis Presley version of “It Came Upon a Midnight Clear” for Frank Hermans.

To this technicolor sound display, the band adds a steroid version of the Trans-Siberian Christmas Orchestra as an instrument.

In the second half of the show, traditional styles emerge, such as Lisa Borley’s soaring “Ave Maria” and Amy Riemer’s kissing “Silent Night”.

A continuing version of “Silent Night” is special. The chandelier shines as Lisa Borley, Sarah Galati and Amy Riemer join together for an a cappella harmonic collaboration of sheer beauty – three wonderful voices mixed together.

Around the song, the story tumbles like a combination of story with shenanigans of characters. In the center is Tom Verbrick as Jafar, wearing a fantastical robe that is part of the show’s vivid visual sha-zam of Ancient Egypt, like Pharoah’s gold lamé shoes. Collared, Jafar was forced to be a miss to the Pharaoh (Frank Hermans) and his wobbly wheel family – Queen Cleo (Amy Riemer) and her daughters, Princess Jasmine (Sarah Galati) and Princess Amira ( Lisa Borley) sticky. .

Word games are everywhere. Groans in the same direction: the mummies sang rap. The mummies are wrapped in fabric. To wrap up. Rap. To find?

Topping the list of word games are three characters, the Maas brothers. Zach Hibbard is Joseph, the guy in the technicolor dream coat who got thrown into a well by his brothers. Blake Hermans is Nickolas, current dreamcoat holder. Pat Hibbard (who wrote this stuff with Frank Hermans) is Chris. Okay, now there’s Chris and Maas. Say the names quickly and – ta-da – you’ve billed the show as “the first original fictional Christmas story.”

It’s a big, colorful and complex spectacle with laughter, meaning and visual pop. It’s fun and funny and the jokes are good and the vocals are hot.

The noise level is a bit loud. While fitting into the style of many songs, what I assumed on Friday night was this: One song was performed with vigor and excellence, and that sound overwhelmed the enthusiastic response from the audience, which was not a rock crowd filled with adrenaline. Even though the response was strong and positive, the response felt weak – like a step down.

This is the 22 of the troopsd Christmas show, and the 20e collaboration of Frank Hermans and Pat Hibbard for the creation of a Christmas show. Each production was different from the last. This kind of sustained originality is a rarity in the entertainment industry. This year’s production takes the troupe’s imagination to a new level.

“Joseph’s coat of many colors” (Christmas parody) – All

“Go Say It On The Mountain” (Jennifer Nettles) – Sarah Galati

“What a child is this” (third day) – Tom Verbrick

“He Came on a Midnight Clear” (Elvis Presley) – Frank Hermans

“Joy to the World” (day three) – Zach Hibbard, All

THE PLACE: Stop and look around. The auditorium of the Meyer Theater is a real eye-catcher. Located at 117 S. Washington St. in downtown Green Bay, the Meyer is one of the state’s colorful historic theaters. In its current form, the Robert T. Meyer Theater opened on February 27, 2002. It can accommodate approximately 1,000 people. The building dates much later. It opened on February 14, 1930, as one of the lavish Fox Theaters. The place is picturesque. The inner aura of the theater was its saving grace towards the end of the 20e century, when the building faced an uncertain fate. The architectural / decorative style is defined as the Spanish atmosphere. The auditorium is designed like a Moorish courtyard of yesteryear. The eclectic mix of architectural styles and colors can be found in all of the halls.

THE PEOPLE: Robert Meyer was President and CEO of Tape Inc. of Green Bay. The theater took its name at the request of his wife, Betty (Janet Elizabeth) Rose Meyer, whose financial contribution at a crucial time helped revitalize the building. The Rose family has a history of deep commitment and involvement in the well-being of Green Bay. Robert Meyer died in 1984, Betty Rose Meyer in 2008.